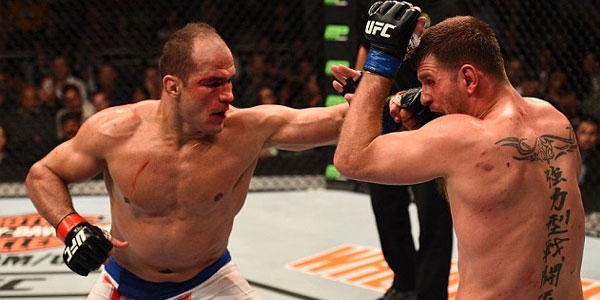 Looking to bet on UFC 211? In this article our MMA experts break down the betting odds for some of the biggest fights.

On May 13th, one of the biggest fight cards of the year will go down. In the co-main event, Joanna Jedrzejczyk will be looking to defend her title for the fifth straight time against one of her most dangerous challengers to date, Jessica Andrade. In the main event, Heavyweight champ Stipe Miocic will be putting his belt on the line against the last man to defeat him, Junior Dos Santos. Let’s take a look at the UFC 211 betting lines for these fights set by NetBet Sportsbook.

The UFC first created the strawweight division in March of 2014. Within 8 months of joining the roster, Joanna Jedrzejczyk captured the belt and has now defended it 4 consecutive times. Jessica Andrade fought her first seven fights in the UFC at 135 pounds, but since moving to 115 pounds has gone 3-0 with two finishes.

You can make the argument that Jedrzejczyk is the best striker in the UFC right now. The Polish kickboxer went 27-2 as a pro and is now 13-0 in MMA. While her strength is clearly on the feet, Joanna has made significant improvements in her defensive wrestling as of late, most clearly evident against Claudia Gadelha in their rematch. This will be key to find success against Andrade.

Joanna Jedrzejczyk is the only fighter that has defended the strawweight championship (photo: mmafighting.com)

Jessica Andrade has looked dominant at strawweight. She’s one of the most physically imposing fighters in the weight class, and has used her massive strength to defeat three straight fighters. Andrade may not be elite in any one area, but she’s very well rounded with 5 KO’s, 7 submissions, and 4 decisions.

It’s not entirely surprising to see most online sportsbooks in the UK listing Joanna Jedrzejczyk as the betting favorite here. She’s constantly improving her game at American Top Team and has the skill set to negate Andrade’s skills. The Polish champ’s odds to win are set at 20/39. If you’re looking to bet on UFC 211, a wager on Andrade may be a solid option. She’s looked incredible as of late, and is the slight underdog with odds of 27/20.

A bet on UFC 211 for the main event is a wager on which man will be considered the most dangerous in MMA. The heavyweight championship has historically been the toughest to defend, but there’s something special about Stipe Miocic.

Stipe proved the hype surrounding him to be real when he made his UFC debut. He won his first two fights in impressive fashion before suffering a TKO loss to Stefan Struve. He then went 3-0 before losing a razor thin decision to Junior Dos Santos. Just three fights later, he made UK gambling news by capturing the heavyweight title with a KO win over Fabricio Werdum, and defended it in his hometown with another first round knockout over Alistair Overeem.

Junior Dos Santos was the baddest man on the planet from November of 2011 to December of 2012. Since his trilogy fight with Cain Velasquez, he’s gone 2-1 including a 2014 victory over Miocic. Dos Sanos had perhaps his most impressive fight to date over Ben Rothwell last April, and will be looking to recapture the belt he once owned.

If you’re looking to bet on UFC 211, this fight offers some great odds to cash out. As we mentioned before, these two fought back in 2014, with Dos Santos edging the current champ by decision. Times have changed however, and Miocic is now the betting favorite with odds of 20/29 according to NetBet Sportsbook. Junior Dos Santos is still one of the most dangerous strikers in MMA, and can end this fight at any moment. His odds to win are set at 27/20.

Are you interested in making a bet on UFC 211? Which fighters win the co and main events? Tell us what you think by leaving a comment below, and make sure to check out NetBet Sportsbook to find a full list of UFC 211 betting odds!