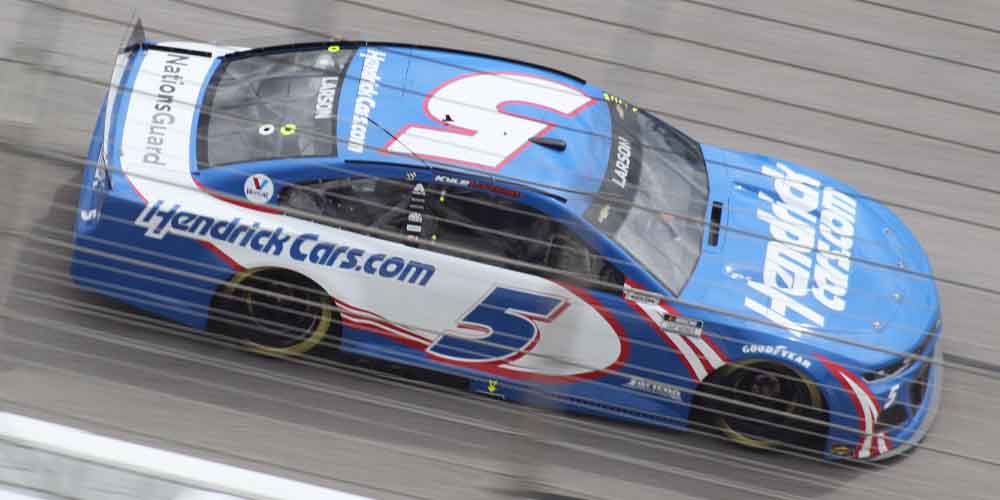 Kyle Larson is only three points behind the current overall leader Denny Hamlin following his great recent form. He is the top favorite to win in Atlanta this Sunday too by the NASCAR Quaker State 400 odds. But Kyle Busch and Chase Elliott can also get the victory on the 21st race of the season.

Claim 50% up to $200 on your first deposit. The bonus code for this offer is ROOKIE50. 18+. New customers only. T&Cs apply.
Claim BonusIntertops review
The race at Atlanta Motor Speedway was part of the NASCAR Cup Series between 1960 to 2010 and held in a longer, 500 miles length. Now the race is back with a 400-mile length this July under the new name, Quaker State 400. Last year Cole Cluster won the race in the previous location, Kentucky. But he is not mentioned in the top favorites this time. Unlike the defending champion, Chase Elliott who won the previous race at Road America last weekend. On his home track he can get another great result. Just like Kyle Larson who has the most wins this season. While the current championship leader, Denny Hamlin is still without a victory. Can he finally break this spell in Atlanta?

Kyle Larson only finished 16th in the last race in Wisconsin which was his worst result since the Buschy McBusch race back in May. After that he finished seven times on the podium including three victories. So it’s not surprising that online sportsbooks in the US favor the Hendrick Motorsports driver to win this weekend again with the odds of +225.00. Larson also finished second in the first race in Atlanta this March which can also be a promising sign ahead of the race.

Another driver who has been performing well in Atlanta is Kyle Busch. Who has a win and seven top-seven finishes at this track so far. Busch is in great form as well after finishing four times on the podium in the last six races. Including his win at Pocono Raceway two weeks ago. The Joe Gibbs Racing driver can challenge Larson for the victory and confirm his place in the Playoffs. At the moment he is in fourth place in the overall standings. And has the odds of +725.00 to get his third win of the season in the NASCAR Quaker State 400 odds.

Elliott and Hamlin can also get the victory

Chase Elliott didn’t have a great start of the season and was struggling a lot in the first few races. Thanks to his victory in the previous race at Road America, he will start from the pole position this Sunday. Elliott hasn’t got any win in Atlanta yet. But he finished in the top 10 four times out of six occasions. Last time the 2020 NASCAR Cup Series champion was only 38th due to a motor failure. So he is definitely aiming for a better result now. With online gambling sites in the US offering the odds of +800.00 for his victory.

While the overall leader, Denny Hamlin can try again to get his first victory of the season. Even though he finished 11 times in the top 5, he just couldn’t get the win yet. It might change this weekend as Hamlin also rides well in Atlanta. In March he finished fourth. While he also finished fifth in Wisconsin last Sunday. His odds to finally get the win is +900.00. The same odds are offered for another experienced driver, Martin Truex Jr. He was beaten on road courses this year. But the 2017 champion is still driving well on ovals. Hamlin’s teammate has three wins in the season so far. And currently stands in 7th place due to some less great results.