Pokie machines in New Zealand under fire after it is claimed these assist in money laundering. 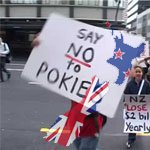 The lawmakers under the pressure from the Green Party need to decide what to do with New Zealand gambling laws as they relate to poker machines, especially when it comes to bar-coded tickets the players get when cashing-in and cashing-out at casinos.

The challenge is that these machines are likely to assist in money laundering activities. The move seeking to de-legalize them will affect many New Zealander poker rooms which rely on these machines. Also, video poker is likely to be hit. It is claimed organized crime groups have been using these to create a legitimate claim on the crime money by stating the cash was won at a casino.

Sky City casino executive, Nigel Morrison, stated in response: “Any illegal activity by customers is bad for SkyCity’s business and we work closely in a collaborative relationship with the police and other authorities to ensure it is dealt with immediately and appropriately.”

One casino deal, under which Sky City casino would build a 3,500-seat center in Auckland in exchange for allowing extra 350 pokie machines, is about to collapse as a result. Further claims against the these machines relate to potential increase in problem gambling. However, the opponents of these devices don’t have a clear and well-thought out argument about how the paper-based system is likely to lead to more poker problem gambling.

Some opponents even claim that the money lost at the poker machines is money stolen from hard working New Zealander players. But, isn’t typical gambling about putting up relatively small stakes in hopes of a big payoff?

At this point, it is not known if those who play poker at online casinos in New Zealand will be affected by the anti-poker establishment.