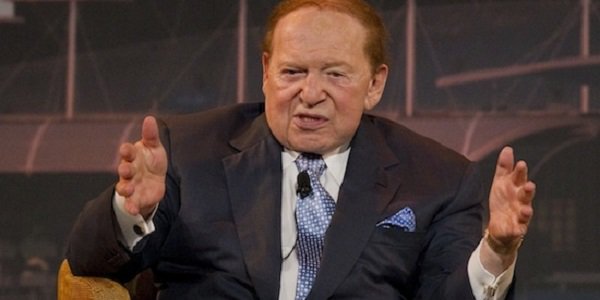 Nevada Assembly Bill No.414 might not sound exciting but it sets out to limit governor’s ability to provide better online gambling for the people of his state, and it’s all thanks to Sheldon Adelson

As the US election cycle finally kicks itself away from the peer and drifts off down stream to a land of constant campaign adverts and carefully managed photo-opportunities, all the candidates, even those that have yet to declare their candidacy, are jockeying for position. Hillary Clinton got herself in the race and has instantly been set upon by the right-wing media with gleeful hysteria, and the Republicans have a gaggle of no-hopers awaiting the arrival of Jeb Bush to beat them.

What both sides have in common is the need for large scale funding and the Republicans at least have the very public backing of Sheldon Adelson whose channeling of millions into right-wing candidates’ campaigns is always attached to a few terms and conditions, no one spends that kind of money for no return, and especially not Mr. Adelson. Mostly what Sheldon wants is for the government to put an end to online gambling, because it hurts his casino business.

Online casinos in the US are still in their early stages, and indeed are being kept there by the sustained efforts of the casino owning throw-backs to whom progress is unacceptable competition. Their political patronage making sensible legislation all but impossible save for in a few states most of which were already predisposed towards gambling in the first place. No one expected New Jersey and Nevada to give up some of the major pillars of their economy.

The expansion of online gambling in the US however has been fought tooth and nail by a man who has vast interests in land based gambling, both in Las Vegas and Macau, and perhaps it’s the latter that gives him such ardent passion to fight the inevitable back in the states. Chinese New Year rolled round and saw profits down 50% on a year ago, the Chinese government crackdown on junkets, the mainstay method of gambling in the former Portuguese colony, hacking away at business.

Getting squeezed in Macau and seeing increased competition in localized markets in the US means that Adelson really can’t afford to let US gambling laws allow internet gambling to gain a foothold in legislative or public acceptance. Obviously his grand scheme is the subtly entitled “Restore America’s Wire Act” which would see a federal ban on gambling across phone lines of any variety, but there’s no hope of that reaching fruition this side of an election, nor indeed this side of a Republican win.

Sadly for Adelson that has seemed less and less likely. If Hillary can withstand the slurs from her opponents that will surely come thick and fast, the support she can expect from female voters and those of minorities (traditionally quite Democratic) the election is hers to lose. So after all the money he’s given away to have support for his bill, it still might just get vetoed by a President that isn’t apt to sign bills framed by those who financed her opponents.

Perhaps then this is why Adelson is also sponsoring bills at the state level to make online gambling if not illegal then just plain more difficult than it need be. Innocuous sounding bills that just happen to limit the choices of games or the financial arrangements of such entities, placing them at a disadvantage, or attempting to reverse the decisions of duly elected officials with whom Adelson disagrees. He has over $25 billion, what else is he going to do except pervert democracy?

Take the Nevada governor Brian Sandoval who tried to help online gambling sites in his state by assisting with their liquidity issues, entering into a very sensible agreement with Delaware’s governor Jack Markell. The essence of the deal, the “Multi-State Internet Agreement” allows players from either state to play on sites based in the other. A sensible expansion of markets and choices for the consumer which still has yet to be operationally put in place some 14 months after the agreement was signed.

Sheldon Adelson doesn’t like it. In Nevada they only have online poker, in Delaware games that compete with his casinos are available, and given how much better internet gambling already is (Check out Bet365 and see for yourself) he could expect to lose business. Which is why he’s putting money behind Asssembly Bill No.414 which would limit the governor’s ability to enter into such agreements to zero save for those pertaining to poker.

The bill has been passed to the Judiciary Committee for consideration but with the sizable force of Adelson’s campaign contributions being dangled before them the chances are this bill will be moving forward. This would significantly hamper those in these states who wish to bet on sports in the US via the internet, but there would be ample room, the bill supporters say, for an interstate poker network. This is supposed to be the bone with which the public should be happy.

That some billionaire with business interests can so blithely scythe away the choices of the US gambling public after the people they voted into office have made a decision to provide a better more wide ranging service for them is abhorrent, but as the tide of inevitable change and redundancy sweeps in over the figure of Sheldon Adelson expect him to fight tooth and nail against it. He’s got the money, the motive and can legally finance Super PACs to the tune of millions.

The US election cycle might only just be getting underway, but should Nevada pass this bill, it might be the signpost of things to come with law makers at the mercy of big donors with their own private agendas. It won’t matter if the federal law allowing internet gambling stands if enough has been done at a local level to make it more trouble than it’s worth. Of course if it doesn’t pass just expect Mr. Adelson to try something else, after all, he can afford it.