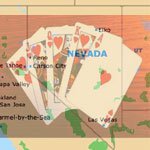 While US Congress delays the legalization of online poker yet again as Sen. Harry Reid’s (D) proposal fails to reach the legislature in 2012, Nevada’s proposed state legislation sounds like good news for American poker rooms in 2013. Although federal legislative efforts may not resume for a long time, the state believes there could still be a solution for players and industry alike.

According to current American gambling laws, federal approval is required prior to any operator providing services beyond Nevada’s borders. The planned amendment, however, would remove the limitation and create the possibility of interstate agreements, thereby improving player liquidity and increasing the opportunities for shared player pools by going beyond a single-state solution for legalization.

Interstate agreements look all the more likely as several states, including Delaware and New Jersey – and even possibly California – are looking to exploit the revenue generating potential of online gambling. Based on available information, the proposed changes would empower Nevada’s executive to negotiate partnerships with states whose legislations enable such agreements to be concluded.

This latest piece of American gambling news has been widely welcomed by major operators from Las Vegas, with license holders perceiving the move as a possible solution to the long-standing Congressional impasse. The amendment will go before the state legislature in early 2013. If accepted, it would open the way for cooperation between operators from several states, generating further business and ultimately creating a significantly improved online experience for the players.