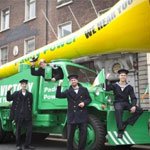 That’s right, Paddy did it again. One of the most popular online sportsbooks in United Kingdom, Paddy Power, released a new advertisement, which immediately fell under scrutiny of country’s Advertising Standards Authority.

Paddy Power operates in full compliance with British gambling laws and is known for its controversial adverts often banned on television and radio. But this time around, the Advertising Standards Authority actually found in favor of the bookie.

The radio advertisement in question played around with the famous phrase “I’d give my right arm”. Paddy Created a character they named Jack Cooper, who goes on to post on Paddy Power Facebook page: “I’ll give you anything for a decent offer Paddy!” And the sportsbook is replying with: “We hear you Jack! Anything eh? Well, just chuck us a kidney and in return we’ll give you … this beauty for the golf.”

The advertisement has been heavily criticized by Kidney Wales Foundation. According to United Kingdom gambling news, the Foundation and twenty six member of public went on to submit a complaint to the Advertising Standards Authority.

They claimed the ad was offensive and likely to cause distress, especially to kidney dialysis patients, transplant patients and their families. The complaint was received, but not upheld by the Advertising Standards Authority, which stated that the ad should be taken in the spirit in which it came across as irreverent and light-hearted.

Well, congrats Paddy on winning this one, however this particular ad actually might take the things a bit too far. Although the main purpose of such ads is to raise awareness, they also have to be tasteful at the very least.