Paddy Power is the Best Place to Bet on Bellator Online in the UK! 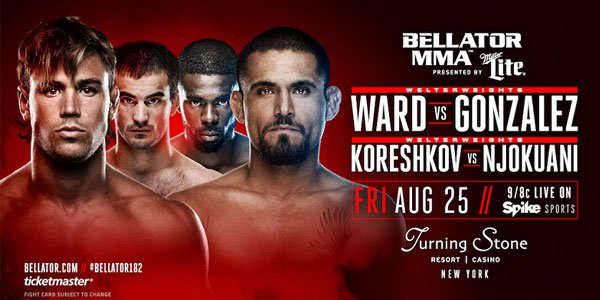 Want to bet on Bellator online in the UK this year? Head to Paddy Power Sportsbook where you’ll find a massive list of odds for all the biggest fights!

Bellator MMA has grown to become a real rival in terms of fan base and roster talent to the UFC. More and more MMA fans are tuning in to watch Bellator fights, in particular fans in Europe where this promotion has been marketing to.

Unfortunately, not many online sportsbooks in the UK are offering Bellator betting odds, with the notable exception of Paddy Power. This incredible online sportsbook offers odds on all of Bellator’s events. Let’s take a look at some fights you can bet on right now.

One of Bellator’s top prospects will be stepping back into the cage later this month against a tough veteran. AJ McKee will likely earn himself a big name opponent with a win here, while a win for Blair Tugman could help transform his status as gatekeeper to contender.

AJ McKee holds the unique distinction of fighting his entire career under the Bellator banner. He began his time in the promotion with five straight stoppage victories before earning two dominant decision victories using his elite wrestling. In his most recent fight he proves his finishing ability is still there with a first round KO over Dominic Mazzotta. McKee is the massive favorite here with odds of 1/10.

Blair Tugman has also fought in Bellator for years, but after alternating wins and losses many began to view him as a man who would never crack into the top of the featherweight division. He’s coming off 3 straight wins here, and might be the best option to bet on Bellator online in the UK if you’re feeling lucky with odds of 5/1.

Brennan Ward, arguably the most exciting fighter in Bellator will be competing once again this month against the massively underrated Fernando Gonzalez in what is undoubtedly one of the best options to bet on Bellator online in the UK. This fight should produce fireworks, but who’s coming in as the favorite?

Fernando Gonzalez lost a close decision to Michael Page back in November of 2016 (photo: bellator.spike.com)

Brennan Ward has fought professionally 19 times, and only one of those fights have ended via decision. He’s a pressure fighter with an extremely dangerous striking game, though that’s gotten him in trouble at times. He’s coming off a tough loss, but he’s the favorite here with odds of 4/5, according to Paddy Power Sportsbook.

Fernando Gonzalez has 40 professional fights to his name, 7 of which have come in Bellator MMA. He’s only lost once in his time in Bellator, a split decision to Michael Page which shows he’s at the top of his game. Still, he’s been inconsistent in his career and is the underdog with odds of 10/11.

In the main event of Bellator 182, two of the best strikers at 170 pounds will face off for a shot at the welterweight championship.

Andrey Koreshkov was seen (and in some ways still is) as one of the best welterweights in the world for the past 3 years. He captured the Bellator title in July of 2015 and earned victories over Douglas Lima, Lyman Good, and Ben Henderson. Andrey suffered a tough loss in his last outing, but a win here will likely earn him another title shot. If you want to bet on Bellator online in the UK he’s a great option with odds of 2/7.

Chidi Njokuani has been on an absolute tear since 2013 going 8-0-1 with 3 KO victories. He’s coming off one of the best performances of his career over Melvin Guillard but not many MMA betting experts are picking him to get the win over Koreshkov. Still, he’s a great MMA betting underdog option to make UK gambling news with odds of 9/4.

If you want to bet on Bellator online in the UK, make sure to head to Paddy Power Sportsbook. Here you’ll find a huge list of odds for every major event. Tell us who you think wins the fights we listed in the comment section below!