People Who Play Poker For Play Money, Are They Mugs? 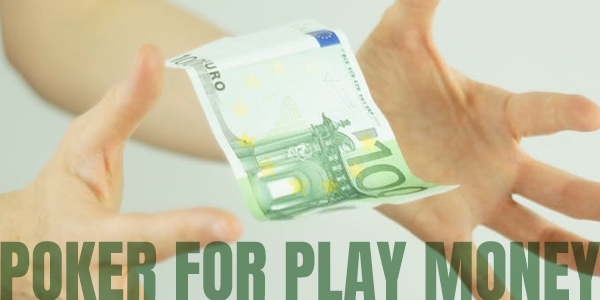 Poker is one of the worlds most popular card games and for millions of people around the world it’s a fun opportunity to risk a little in pursuit of reward, however for the beginner the heady atmosphere of online poker sites like Bet365 Poker can be a bit daunting. Fortunately for all those that would like to practice and hon their skills you can now play poker for play money at some of the more well known sites, but you might not want to mention it to everyone….

The argument should probably not have gone on quite as long as it did, and certainly the whole shouting-between-rooms eventuality was a tad unseemly, but one thing was abundantly clear, the views on people who play poker for play money were quite polarized in the offices of GamingZion. It was a gulf I found mirrored elsewhere both online and off, a hot button issue nearly as divisive as Donald Trump, abortion and immigration. Like Marmite, it appears, either you love it or think it insane.

Bet365 Poker might not offer the same facilities as Pokerstars does to play poker for play money but that is perhaps less surprising than might be assumed in these days of ubiquity across network gaming platforms and ever-changing UK gambling laws. For some the mere concept of playing a gambling orientated game without the harsh reality of actually risking something tangible (your money) is pure madness, like having Brazil play France in the World Cup final but not bother taking note of the score.

Is Poker Pointless Without Real Stakes?

Those bored with their regular bet on sports in the UK did express the opinion that anything which facilities people’s ability to play poker for play money, will naturally, over time, increase the number of people who actually play for-real-cash poker, and that sites like Bet365 Poker benefit from this as much as Pokerstars does. It was also mentioned that it’s a little harsh to expect everyone to swim if you just throw them in the deep end. Like expecting a Sunday League team to take on Manchester City in the EPL.

Does Bet365 Poker Allow You To Play Poker For Play Money?

It was, I have to say, only the somewhat loud threats of redundancies that finally calmed the office air and put the discussion of people who play poker for play money at sites like Bet365 Poker on hold until we got to the pub where a further, far more frank debate ended in the same stalemate of conceptually diverse attitudes. Some sticking to the view that practice makes perfect and everyone should be allowed a little practice, to the hardcore purists who felt the best lessons were hard and that poker teaches as it goes along.

On a more macro-level this argument, that is by no means limited to just the GamingZion office denizens, has left some in the UK gambling news of regulatory changes will force even more of a wedge than already exists between these two worlds, and that in times to come there will be an even larger chasm twixt those who play poker with play money and those who risk their own hard earned cash to enjoy this fabulous game. Which will win out in the end more a question of law than of sense.