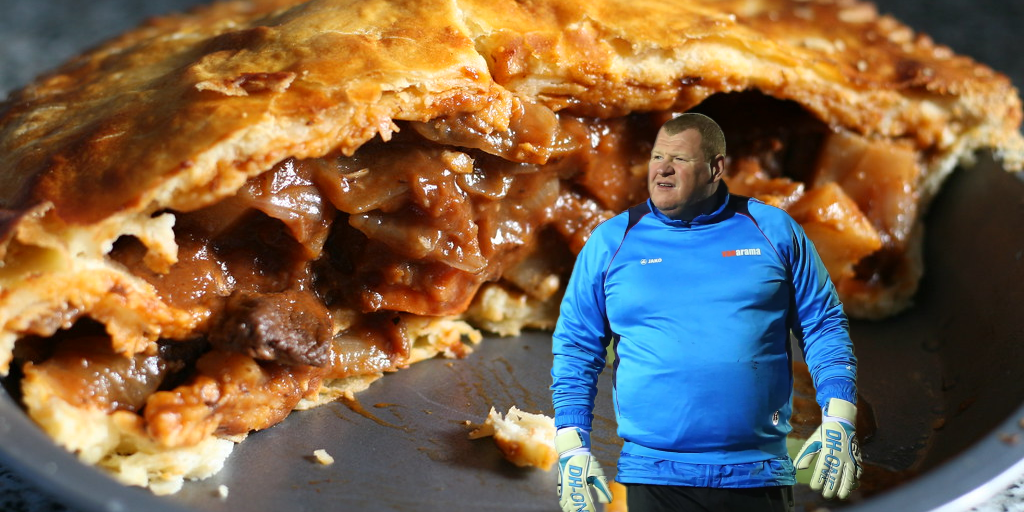 The poor pie eating keeper. What started as a bit of a lark, ended up with more serious consequences for one goalkeeper. Last month, Sutton United Football Club accepted the resignation of their reserve goal keeper, Wayne Shaw. Apparently he was in breach of betting rules. Both the Gambling Commission and the Football League are looking into the breach after the 45-year-old man ate a pie during the FA Cup loss to Arsenal. They’re already calling the over-blown story “piegate”.

The jist of the tale is that a sportsbook, Sun Bets, offered odds of 8-1 that the reserve goalie would eat a pie on camera during the match. Other online sportsbooks, like 888Sport, are more careful about what you can and cannot bet on. Even though Shaw knew of the wager, he went right ahead and scoffed down a pie. He claimed that it was “just a bit of banter”. But, unfortunately for him, he’s been made an example of in the pettiest and vindictive manner possible. “What happened didn’t make us look very professional,” said Sutton boss Paul Doswell.”It’s something that we’ve dealt with quickly as a club,” he told Sky News on Monday. ” Wayne himself offered his resignation to the chairman that day.

Shaw ate the pie whilst standing by the substitutes bench and put it down to a “bit of fun”. “We are told we are not allowed to gamble as it is full-time professional football,” the pie eating keeper told BBC Radio 4’s World at One program. “In no way did I put anyone in jeopardy of that – this is not the case here, this is just a bit of fun and me being hungry.” Then things appear to have gotten out of hand as some didn’t see the funny side of things. To that end, matters quickly escalated to the point of surrealism.

For a start, the Football Association said that they were going to launch an inquiry to determine whether Shaw breached gambling regulations. The Gambling Commission jumped on board. Their director of enforcement and intelligence, Richard Watson, claiming: “Integrity in sport is not a joke and we have opened an investigation to establish exactly what happened.” Then we had David Schollenberger, head of gaming and leisure at Healy’s law firm, even going as far as to say that Shaw committed a criminal offence and could be facing up to two years in prison.

Sutton boss, Doswell, added that the pie eating saga should be “treated in the same light as spot fixing. It’s clear in FA rules that you’re not allowed to bet – and whether it was a fun bet, or whatever it was, it wasn’t acceptable,” added he added.”Obviously we were very concerned with the implication that the club, myself, my assistant Ian Baird or anyone else had been involved in the decision-making. It’s been very disappointing, there’s no doubt about that. I woke up this morning to this storm of criticism”. With regard to the resignation, he went on to say, “It’s with a very heavy heart, because he was a good friend of mine, but I think the board felt they had no other choice.” What a great and upstanding friend. Not!

Things quickly began to spiral out of control and look like the childish response it was. So the Gambling Commission sought to be the grown-up in the room. They claim to be looking into whether there was any “irregularity in the betting market. And trying to establish whether the operator has met its license requirement to conduct its business with integrity”. Though the pie eating keeper didn’t place a bet on himself, someone else did. Interestingly enough, Sun Bets used their Twitter account to let the world know that they had paid out a five figure sum to some lucky/clever punter. And this was in spite of the fact that Shaw ate a pasty, not a pie!

The FA’s rules are very stringent with regard to betting. All football club members, teams and staff are forbidden to bet on any football match. There are also pretty clear rules with regards to any “football related” bets, along with passing on insider information. If someone’s breaking the rules, then what normally follows is a quick fine. For example, the Newcastle United midfielder, Jack Colback received a £25,000 fine for a misconduct charge related to betting.

Keep your pie away Mr. Keeper!

Betting companies, like 888Sport, also have a requirement to report any suspicious or unusual betting patterns or behavior. In fact, this is the only means by which all sports can guard against collusion between fixers and players. It’s the Gambling Commission’s job to over see the betting industry and constantly be checking up on all online sportsbook sites in the UK. Right now it’s looking to see whether the company, Sun Bets actually broke any of their guidelines. Such behavior could put in jeopardy the companies hard won gambling licence. There is concern about the “novelty” market and the Commission takes a rather snob view that these types of bets could be “harmful to the wider perception of gambling in Great Britain”. Who are they kidding? As if the perception of betting companies is already stella!

It’s not as if the industry is not riddled with double standards. Online sportsbook news in the UK reminds us of that. As they point out, going back a few years, we can all remember that the FA Cup itself was sponsored by the gambling company, Littlewoods. In fact, today, nearly all top clubs have sponsors which are betting companies. They call them “betting partners” in some weird Orwellian doublespeak. It’s both typical and sad, that the Football Association prefers to punish this “roly-poly” non-league keeper than take a deep dive into the nefarious relationship between betting companies and football clubs. So the pie eating keeper has lost his job. But Joey Barton, who placed over 1,260 bets in the last 10 years, is still a fixture in Premier League Football.

“Wayne’s absolutely devastated,” revealed Sutton’s manager, Paul Doswell. “He has been swept along with what has happened in the last three or four weeks since the cameras got him at the Leeds United game. It’s obviously got into another world in terms of what he’s used to. I think he’s been ill-advised at times and he’s just made a genuine mistake. He’s been heavily criticized in the papers this morning. He’s such a lovely man but his judgment obviously wasn’t great.” Bollocks! This manager could have easily stood up for his keeper. The man was a loyal player and liked a bit of fun. Everyone involved in his forced resignation should be hanging their heads with shame.