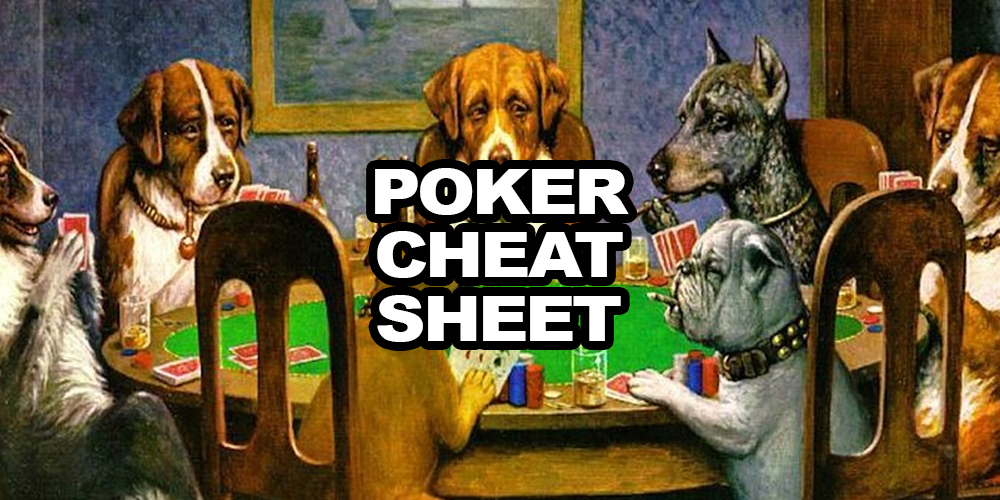 Once you get to know the poker hands, it’s pretty simple. There are 10 different variations of cards you can have, starting from the royal flush to the single highest card. The rank of the cards is pretty simple too. As with most of the other card games, the ace is the highest, then the king, queen, and jack. Then the numbers are in the usual order from ten to two. In order to make things, even more, simpler for you, we’ve created this poker hands cheat sheet for you.

As you probably already know by now, there are several different types of pokers. It’s safe to say that the hands are exactly the same for them. Texas Hold’em is the most popular and widely-used poker format in the online gambling sites in the US. In this one, you can make hands from both your hand and from the table. Make sure to not heavily depend on the table since these cards are also your opponents’ cards.

Even if you don’t have access to real-life cards or companions, there are hundreds of online betting sites in the US that offer online poker. Don’t forget to look at the state laws to find out if online gambling is legal in your area.

High card- You have no combinations of cards from down below and only random cards. You should present your cards from the highest to the lowest and there’s an extremely thin chance of winning. Maybe some other time!

Pair- It’s better than the high card, but still not the best in the poker hands cheat sheet. The hand consists of two cards of the same kind and the three highest single cards in your hand.

Two pairs- If you have two cards of the same kind, for example, two aces and two kings, you have two pairs. Finish the set with the highest card in your hand.

Three of a kind- As the name probably already suggests, this is a hand that consists of three cards of the same kind and two other highest single cards.

Straight- Straight is when five cards in your hand follow each other and not necessarily in the same suit. Ace can either follow a king or start a new straight followed by two.

Flush- You can say that this one is the exact opposite of the straight. Five cards that are in the same suit, but not necessarily in any order. The highest of the five is called the head. If two players have the same flush, the one with the higher head wins.

Full house- Three cards of the same rank with a pair. For example three jacks and two kings. If two players have a full house, then the one with the three of a kind with the higher rank wins. All these names mind sound complicated at first, but you can easily memorize them with the poker hands cheat sheet.

Four of a kind- Four of a kind, or sometimes called poker is pretty iconic in the poker. It’s four cards of the same rank with a single card.

Straight flush-  It is five cards that follow each other and in the same suit. The highest-ranking card is the head and decides the rank of the straight flush.

Royal flush- Royal flush is the best hand you can have and no card beats it. It’s a straight flush that starts from ten and goes up to ace. If you’re dealt this hand, go for an all in!

Possible betting options in the poker

If you’re an absolute beginner to poker, we’re going to break down the bets for you. Don’t get intimidated by the words that make you feel like you’re in some secret society. It’s pretty easy once you get familiar with the poker hands cheat sheet!

Fold- Fold means stopping your participation in the hand, and letting go of your cards. You’ll lose all the money you’ve put before and would have to wait for the next turn. Better luck next time!

Bet-  Bet or open is a call you make to open the betting round and putting money in the pot. You can bet if you’re the first one to act in the game or the person next to you has checked.

Call- After someone called a bet, you can either call. raise or fold. Calling means that you’re matching with the bet the other person has offered.

Raise- If you believe that your hands are good enough, you can raise after someone has made a bet. You put in more money than calling and open a new betting round. Your opponent can either call, raise or fold.

Check- If no one raises or calls in a betting round, you can call check and pass the calling to the player on your left. It gives you a chance to see another street without betting. If all the players check, then they will turn their cards to see who got the pot. Or if there are only a few left, the players get a free card.