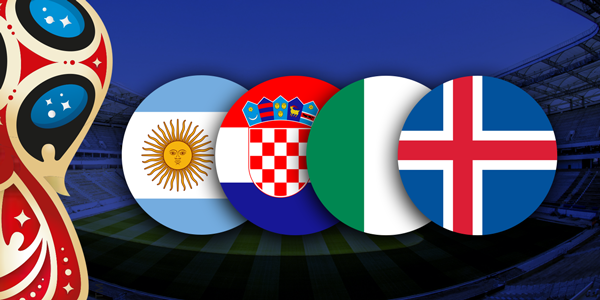 The Group D betting specials feature some of the most talented squads and best strikers in the entire 2018 World Cup. For that reason, predicting the results of this group might seem to be pretty tricky. But is it really that tricky?

Argentina, Croatia, Nigeria, Iceland. All of these teams would deserve a spot among the best 16. Obviously there is room for only two of them, so let’s see what pairing online betting sites in Russia are expecting.

The safer of the Group D betting specials: best team(s)

Betting on Argentina is safe but offers only a modest profit. The South American team has won the group stage in all of the World Cups that Messi had participated in. Argentina then advanced to the quarter-finals in 2006 and 2010 and got all the way to the finals four years ago. It would be a huge upset if they didn’t excel at the group stage yet again, so their odds are 1.67 for winning the group and 1.18 for being in the top 2.

Predicting the other team to to advance to the knockout stage is harder. Online sportsbooks in Russia suggest that Croatia has significantly higher chances than Nigeria: they are giving 1.42 for the European team’s appearance in the top 2 (and 3.25 if they finish first) as opposed to 3.50 if the African side achieves the same thing (and 12.00 in case they become the best of the group). However, Nigeria may be underestimated.

While their defense might need some fine-tuning, their efficacy at counterattacks threatens to turn the tables around at any moment. They also have formidable Premier League players in their ranks. Unfortunately, one of them, Wilfred Ndidi, has suffered a hamstring injury, which might prevent him from participating in the World Cup. However, his doctors are optimistic and if he indeed gets better until June, Nigeria has a shot at an upset. Gamblers willing to take risks will surely be tempted by the reasonable betting odds and place some money on the African team’s being in the top 2.

The remaining team, Iceland, which has become a major force in football almost overnight, will be fighting an uphill battle. Granted, they will be aided by the element of surprise. Even Joseph Yobo, the former captain of the Nigerian side, admitted that “Iceland is the surprise package of Group D.” While Iceland’s odds for being in the top 2 are not unrealistic (3.75), we wouldn’t expect them to finish first (15.00). The odds for their grabbing the least amount of points are 2.30.

For those who are looking for bigger returns, there’s another group D betting special: you can bet on the player to have the most goal celebrations.

There is no surprise Messi is the bookies’ favorite in this category. On second thought: that choice is not self-explanatory if we take a look at his World Cup history. After all, he did not manage to score in the 2010 World Cup at all. While he had a major role in most of his team’s goals, it did not show in his records, which only registered 1 assist and 0 goals.

On the other hand, when Messi scored in a World Cup, he did it in the group phase. In 2006, as an 18-year-old prodigy, he scored once; in 2014, he found the net 4 times. The World Cup in Russia could easily be his last one and he will want to make it memorable, which in itself is a good reason to bet on him.

While the Croatian player is the second favorite of the bookies, his team favors division of labor instead of relying on a go-to goalscorer (they abandoned the latter strategy after Golden Boot-winning Davor Šuker’s retirement). This is demonstrated by the stats of the latest national tournaments: he scored twice in the 2014 World Cup and did not find the net in the 2016 European Championship. The bookies might be slightly overestimating his chances.

While these two have the best chances, Group D will see plenty more talented players on the pitch. To check out the betting odds of potential dark horses, visit Unibet Sportsbook.