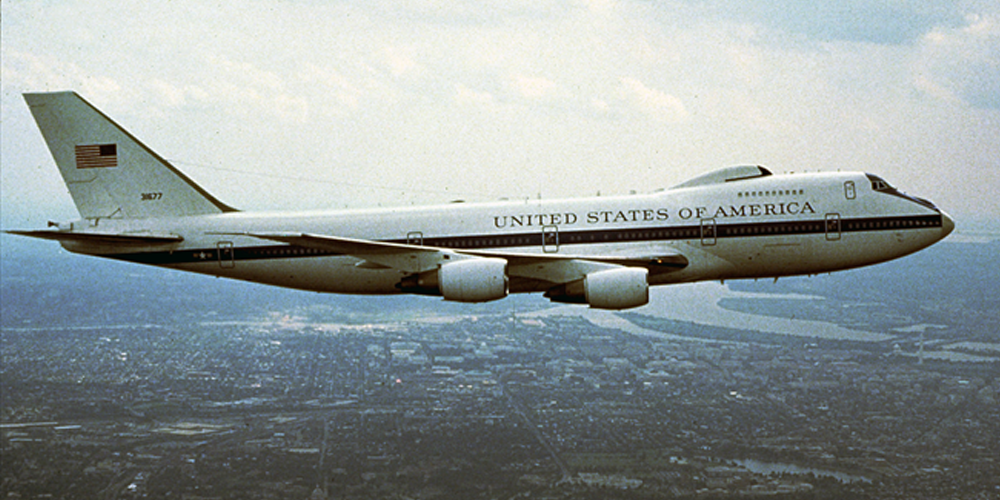 Air Force One is the public face of the US President’s air transport, but lesser seen in the E-4B Doomsday Plane. Trailing the President everywhere, this is the aircraft for use in case of nuclear war. However, as the future of Air Force One morphs into Space Force One they may well become one and the same. In an era of orbital, or even suborbital flight, the costs of both could be prohibitive. So, any proposal for Space Force One will have to take into account this role too.

Akin the modern Air Force One the E-4B Doomsday Plane is a retrofitted 747. This gives it the range and capacity to undertake it’s mission worldwide. With air-to-air refueling it’s range can be extended almost limitlessly. Known as Looking Glass (it being an airborne mirror of ground based C&C systems) it is part of the NAOC, or National Airborne Operations Centre. This ensures the continuity of military command and control before, during and after a nuclear exchange.

The E-4B Doomsday Plane comes with some very specialist communications equipment to facilitate this role. Most notably the trailing wire antenna, some five miles long. This provides for EMP survivable low-frequency communication with US nuclear submarines. The MEECN, Minimum essential emergency communications network replaced SLFCS. Space Force One will require a similar system, albeit one designed to operate from far higher altitudes or, indeed, orbit.

The MEECN system allows command and control of nuclear weapons whilst under attack from them. So it prevents a “beheading” attack on the United States. Often this communication is one way and relayed through other elements. In the SLFCS days these were the Green Pine facilities. Today observers suspect the E-4B Doomsday plane has LF, VLF and ELF transmitters. A Space Force One would need a far more sophisticated system. Possibly incorporating UUV relays.

Space Force One would operate at either sub-orbital or even orbital altitudes. Whilst this could make EMP less of an issue for those aboard, communications will become more difficult. Satellite relays are inherently insecure platforms, so Space Force One must include a degree of self-contained systems. These requirements will be the true driving pressure behind the design of any Space Force One. It might sound like a starship but it’ll need to be a command bunker too.

E-4B Doomsday Plane Replacement Could Be Space Force One

Successful low frequency communications are all part of the TACAMO doctrine that is unlikely to be changed anytime soon. Take Charge And Move Out is a continuation program that will form the basis for operational requirements. Future submarine development is already moving towards unmanned underwater vehicles. This lessens the risk to naval personnel but requires even better C&C systems. So much so the current E-4B Doomsday Plane variants couldn’t handle it.

So then whilst developments in aviation or space flight might dictate its engines or cabin configuration, it’ll be communications that will actually determine its design. Space Force One will not just be an ultrafast transport system, it’ll be the E-4B Doomsday plane updated. Possibly with nicer seats. Some nations would raise objections to this. However, anyone in the US gambling laws governing the use of space in warfare would prevent the development of Space Force One should think again.

Read more about Space Force One

We take a look at how any future Space Force One will need to adopt the capabilities of the E-4B Doomsday Plane as well as Air Force One.