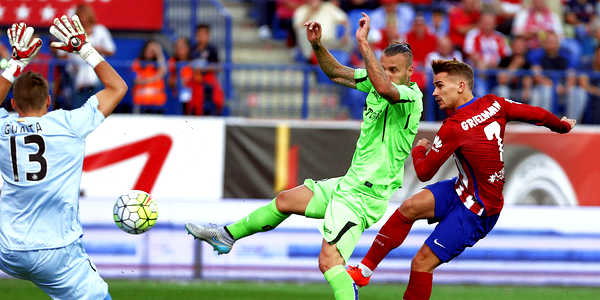 On the first La Liga match of 2018 a local derby will take place as Atletico Madrid is set to host Getafe at Wanda Metropolitano. In our Spanish La Liga betting preview we expect a walkover for Atleti, and here is why.

Online sportsbooks in Spain are all reflecting on the new Griezmann-Costa partnership that may last for a short period if the French forward makes a lucrative move. Though they may boost Atleti’s attack force for few weeks, especially that Atletico Madrid need clear victories to maintain their runner-up position. On the other hand Getafe are visiting one of the most formidable grounds in La Liga, and they need to break through the fear and self-doubt this time. As Getafe’s mission seems very difficult in our Spanish La Liga betting preview we recommend placing a wager on a victory for Atleti.

According to online sportsbooks Getafe have never scored against Atletico Madrid during Diego Simeone’s time in charge, and over 990 minutes of football against Argentine’s team Getafe have scored zero times, while conceding 23. Only twice they have been able to even escape with a draw in 11 meetings.

However their short journey to the Estadio Wanda Metropolitano will be the first ever match in Atletico Madrid’s new home. Will the new stadium bring luck to the visitors? It is very hard to bet on an unbeaten team to lose among their audience by a team who have only won one of the eight away matches in La Liga so far.

How far Costa will make a difference?

With Diego Costa’s completed his long-awaited move to the Wanda Metropolitano, it took him only five minutes to score for Atletico Madrid in their 4-0 win over Lleida in Copa del Rey. The Spaniard Costa is fitting in his old-new team very quickly, and that will boost Diego Simeone’s attack force, especially if being matched well with the French forward star Antoine Griezmann.

Atletico will play without their midfielder Saul Nigues after picking up his fifth yellow card in this season, but Atleti has a very solid defense conceding only three goals at home, which will make Getafe’s mission an extremely tough one.

Tips on Atletico vs Getafe Odds

For finding best odds we recommend visiting Netbet Sportsbook. Atleti have the upper hand with odds standing at 1.37, while the odds for Getafe to win are 9.25. If you wish to bet on team goals, we recommend opposing early goals at the Wanda Metropolitano, because only one of the eight home league goals Atleti have scored has come before the break, with the side only conceding once in the first half of home goals.