The Bookworm Gambler’s Digest: Thirteen Against the Bank

News >The Bookworm Gambler’s Digest: Thirteen Against the Bank 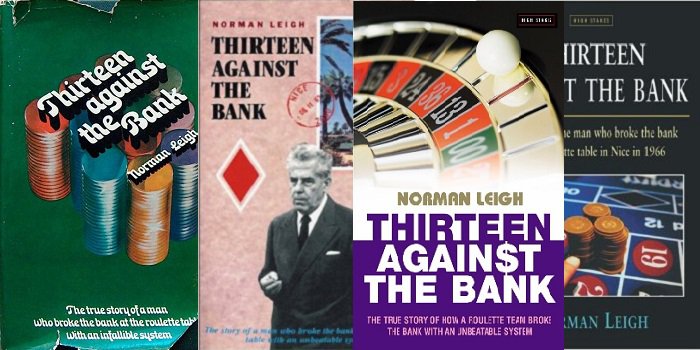 Bring out your reading glasses, because Norman Leigh’s wonderfully light book is filled with funny comebacks and a protagonist that you’ll quickly come to love.

You simply won’t be able to put this book down. I am not kidding. It is set way before the time of online casinos in France and the modern gambling scene. It will take you on a tour into the wonders of the Côte D’Azur, more specifically Nice, and line up an elegant parade of casinos. You will almost feel the scent of the sea and hear the roll of the roulette ball. Norman Leigh depicts the summer of 1966 in Nice like nobody else in the history of authors.

But what is this novel really about? Not the luscious palm trees and the beach, that’s for sure. It is packed with gambling action so real, it’ll have your head spinning. It is a true story of how a person attempted to beat the system by adopting a gambling theory presumed to solve the age-old gambling dilemma: why does the casino always win in the end? Well, the solution was to take an existing gaming theory (that of Hon. S.R. Beresford,) and reverse it to come up with the ultimate answer to the gambling loss problem. The complicated system was presumed to be undefeatable, and so unfolded the gambling adventure of Norman Leigh.

Luck is very good to have while playing roulette, but a scientific method will prevail in the long run

Let’s see what the (Reverse) Labouchere theory is about and put it to a test afterwards on mobile casino gambling sites. The main concept of this hypothesis is, that the reason people lose money when they gamble happens because each time the casino defeats someone, they increase their bets. They keep on trying to win back what they lost, often to no avail. Gamblers enter this cycle and have a hard time finding a way out of it. All the while, they keep on losing money. Bereford’s theory came up with a solution, however.

What if, each gambler made it their priority to keep bets leveled? The bets could only increase when there was an actual win at hand. Otherwise, they would have to stick to the same levels. This would mean that the player would be in advantage over the casino, because the money flowing in would never be more in proportion to the winnings. Norman Leigh took this sharp little theory and reversed it: bets could only be increased in the case of consecutive wins. Otherwise, in the case of a loss, bets would stagnate. The huge problem with this system, however, lay in its faith in having a succession of wins.

A financial boost from the team

What’s better than breaking the bank? Doing it in a lovely Riviera town

Normain Leigh was a sharp, mischievous man: he put together a team who would accompany him on this ambitious journey to break the bank. The non plus ultra feature of this was that somehow he didn’t even contribute a penny to this adventure. Team members, however, had to pay their own travel expenses, hotel bills and (this is the best) a GBP 250 as stake money. All this to apply a theory not yet used in a foreign country. By the way, 250 pounds in those times was worth much, much more than today… I bet Leigh would have loved mobile casinos: imagine what dimensions would’ve opened for him with some of these apps.

Not only did Leigh’s team have to pay a sizable amount to play and test an unknown, new hypothesis, they also had to give 10% of all of their winnings to Leigh. There was no mention of the players’ losses, Leigh didn’t have to worry about things like that: he had pure profit coming his way each time somebody won. The end of the story was that they managed to tidy up a local casino with their coordinated hard work. French authorities got a whiff of the events and the team and Leigh were eventually banned from gambling in France and were forced to leave. Don’t read this book because of the theory, read it for your entertainment. It reads best if you don’t take it seriously.