Danes Must Win Against Albania

News >Danes Must Win Against Albania 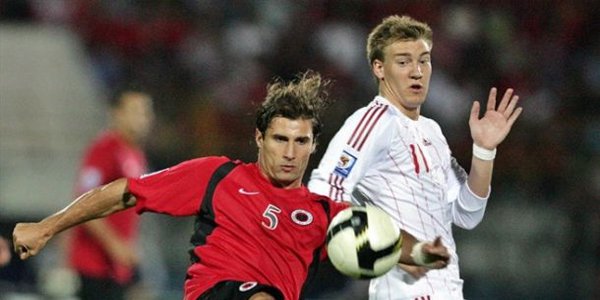 In the almost too near the knuckle satire of US politics “Wag The Dog” the dirty trickster and fixit man Conrad Brean, played by the inimitable Robert De Niro, saves the reputation of a kiddie fiddling president by distracting the attention deficient American public by enlisting Dustin Hoffman and Willie Nelson amongst others to help him stage a fake war with Albania. When asked why he’s chosen this small nation in the southeast of Europe he replies by asking what anyone knows about it.

The answer he gets in the movie is “Nothing”, but real life isn’t always as Hollywood portrays it, even when it’s being far too accurate for its own good, and whilst Albania might be an unknown quantity for a great many people on that side of the Atlantic there are more than a few on this side that know precisely enough about Albania to never, ever, under any circumstances, piss them off. It’s just not a wise move, because they take things quite seriously.

Now obviously a nation the size and strength of the US has nothing to fear from Albania, indeed in strictly military terms, no one does. The Albanian military might be a member of NATO and do a bit of patrolling the seven seas but beyond that they’d have a problem defending Tirana from angry football fans let alone an invading army. The issue with Albania is not of such a macro nature, but makes itself obvious far lower down the scale.

In 2014 estimates put the number of families in Albania involved in blood feuds as being around 3,000 feuds which have, since the fall of Communism, led to nearly 10,000 homicides in the nation of less than 3 million inhabitants. That’s an alarming statistic, but what makes it even more alarming is that in terms of overall crime Albania still ranks as having far less than Sweden, England, France or Denmark, the latter of which is probably gambling news of their approaching encounter doesn’t spark problems.

Albanians jubilant after away goal against Portugal  (Photo: SkySports)

Denmark is up against Albania in their Euro 2016 Qualifying campaign next and whilst the in times gone by it would be seen as an easy win to rack up, this time round the Albanians have been seen to play far better than their reputation would have people expect. Their surprise victory over Portugal in Aveiro one-nil kicked off a campaign that has only slipped up against the Serbs who battered three past them on a woeful night in October.

Since then the Albanians have beaten the Armenians 2-1 having drawn one all with the Danes, a draw they now look to improve upon in Copenhagen on the 4th of September. For the Danes it will be a bit of a do or die match, victory assuring them of progression in the competition, a loss meaning they’d go into the hat for the also ran place winners. For those that like to bet on sport in Denmark this is a tense wait, because they’re gagging to be in the finals in France.

The Danes haven’t managed to beat the Albanians yet in this tournament, but their record against them at home is undeniably better with four wins in front of a Danish crowd, notably a 3-0 hammering in the qualification process for the World Cup in 2010. However the Albanians are just fresh back from beating France in a friendly, and there’s background circumstances to consider. Circumstances that could see Albania move ahead of Denmark in the table and qualify automatically for the finals.

Albania vs Serbia game turned into a battle once spectators run to the field  (Photo: Mirror)

The Court of Arbitration for Sport is yet to rule on Albania’s appeal against their loss against Serbia, given the game was abandoned due to crowd trouble and illegal drone dive-bombing, but could in theory award it more points, this would put Denmark in an even more perilous position as the Albanians have a game in hand over them. That means as Danes rush to ComeOn! Sportsbook to take advantage of Danish gambling laws and back their team to win, their team is getting nervous.

This resurgent Albania now stands between Denmark and a place in the finals, and the Danes have to be wondering just how serious the Albanians are taking it, because when they get a bee in their bonnet about things, they just don’t stop. Perhaps the home advantage will see Denmark alright, but the energetic Albanians are not going to let them walk away with it wherever the game is played, so expect some serious fireworks on the pitch come the start of September.