Norway’s Women Reach The Last 16 Of The World Cup 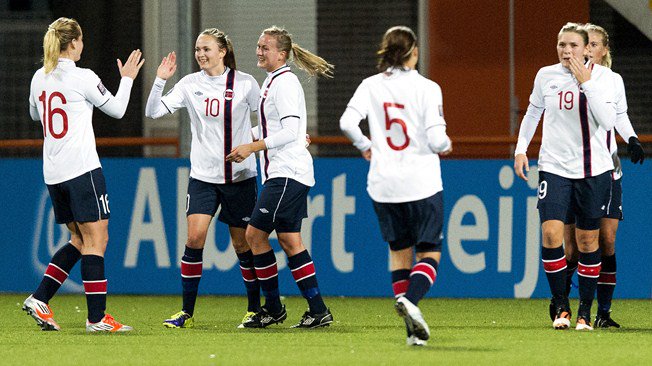 The Germans might have the goal difference but the Norwegians have shown they’re not to be cowed, so will these two meet again in the final?

Group B in the 2015 Women’s World Cup has been fascinating from the off. Whilst much of the footballing world has its eyes torn between the Copa America and the FBI’s online most-wanted list, the Canadians have been hosting a truly fabulous tournament despite the little touches of inherent sexism without which we might forget the FIFA connection altogether. Equality is all very well in principle, thinks FIFA, but actual application in the real world is just beyond it.

Norway Make It Into Last 16

The artificial turf that the ladies are being forced to play on is an abomination against the sport itself and were the men asked to play on it their answer would be brief, to the point, and completely unbroadcastable. If you think the fuss made about Qatar is bad it would be as to nothing compared to the ferocious backlash that would occur if the precious men were asked to play on a plastic pitch. As it is though, it’s only the girls so that’s okay then.

This bias is ridiculous in this day and age, but then FIFA still lives in the past, a past that is even now haunting it. Sepp Blatter might have suggested the women wearing tighter outfits, but it was the rest of the FIFA executive laughing about it and wondering how much extra it would cost to have “Crystal” wear a Norwegian strip in the next post-conference stress relief encounter. The actual Norwegian ladies team is gambling news of its advancement to the final 16 will bolster its support at home.

Norway kicked off by battering Thailand four nil the team and then holding their own to grab a goal-apiece draw against the Germans who were fresh from a rampant destruction of the Ivory Coast. The Lansdowne Stadium in Ottawa on the afternoon of June 7th was witness to one of those classic one sided matches, and as the Ivory Coast went down a humiliating ten-nil to the Germans it seemed sure the Norwegians would manage a similarly easy victory.

As it was the Norwegians didn’t have it all their own way, coming out just three-one winners, the hammering by the Germans having woken the Ivory Coast up somewhat, but that still ensured that they came second in the group (with just that massive goal difference separating them from the Germans) and automatically qualifying for the knockout stages of the competition that starts on June 20th, the Norwegians first do-or-die game coming a couple of days later back in Ottawa.

Those taking advantage of Norwegian gambling laws will find that sites like ComeOn! Sportsbook are offering a decidedly full coverage of all the betting opportunities and give Norway a shortening 29.00 to win the tournament. Of course Germany still top the odds of taking the trophy on 2.70, with the US just behind them on 3.90 and the French at 8.75 in third place, but this is football in a knockout stage anything could happen.

The Norwegians are up against the runners up in Group F, a group that contains Colombia, England, France and Mexico. At present only the Colombians have automatically qualified with the English and French locked in midtable with a win and a loss apiece. Both on three points their next games decide their fate. England face the Colombians, whilst the French face the yet to win Mexicans. This leaves that second place slot to face Norway in the last 16 still hanging in the balance.

Normally you’d put “Le Bleu” down as sure fire winners against the Mexicans but just recently got beaten by Albania in a friendly, so who can say? Mexico don’t want to come out having not won a match and will be putting all their efforts into the game, however it is certainly England that face the more tricky challenge. The complexities of the mathematical possibilities mean that even the Colombians could end up playing Norway, Mexico pretty much the only team that can’t.

Whomever the Norwegians end up starting their knockout phase against you can expect them to come out fighting and trying to improve those odds on winning, with the Germans playing other people will the final it’ll be the Brazilians the Norwegians will probably have to get through first, however given the way they’ve been playing it’s unlikely anyone else will give them any problems. So if you like to bet on sport in Norway you might want to get a bet on whilst their odds are still as generous as they are.