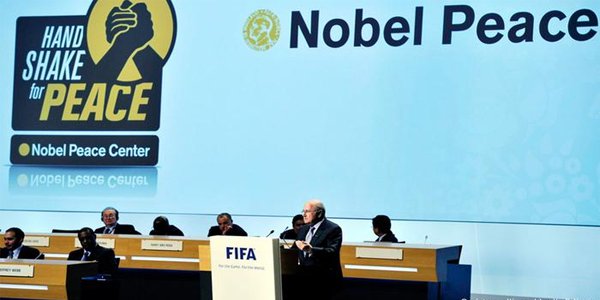 The Swedish Nobel Peace Center has pulled the plug on its cooperation with FIFA, losing out on 800,000 EUR a year by doing so, but what does that say about Football’s governing body?

The legend that was Robin Williams once famously pointed out that soccer (as he called it) was a terribly passive aggressive game. Players charge up to one another, have a physical confrontation and then instantly behave as if they’ve done nothing wrong, pleading eyes and placatory hand gestures aimed at the referee in case he can be convinced by their acting ability that he really didn’t see them scrape their boot down the back of an opponents ankle, or knee someone in the balls accidentally on purpose.

Interestingly it would seem this passive aggression is just as much a part of Football off the pitch as it is for players on the grazing green stuff. FIFA’s scandal seems to involve a lot of people holding their hands up and claiming to be wholly innocent whilst vast quantities of paperwork build up saying precisely the opposite. There are many in the organization even now gambling news coverage of the next round of arrests won’t involve TV pictures of them being led from their homes in cuffs by the FBI one morning.

More indicative still than the looks of worry on FIFA executive’s faces as they’re told Chuck Blazer was an inside man for the authorities since 2011, is the number of organizations now attempting to distance themselves from the body that governs world football. Last week Interpol, the European-wide police squad, prematurely ended a 10 year deal with FIFA, worth some twenty million euros, due to organizaiton’s plummeting reputation and ongoing charges of corruption, money laundering and racketeering.

This week it’s the turn of the Nobel Peace Center to quietly sidle away from FIFA as if the very sword of Damocles was hung above their heads. The NPC announced they would be ending their joint-initiative, “Handshake For Peace” with FIFA just as soon as possible, implying the footballing organization was now not really able to promote “peace and fair play” despite giving the NPC some 800,000 EUR each year. The NPC of course hope the initiative will continue without them, but the damage is probably already done.

A Backhander For Peace?

The handshaking will go on, of course, even as those who like to bet on sport in Sweden hold their breath to see if they’ll reach the knockout stages of the Women’s World Cup in Canada, but the Nobel people walking away shaking their heads is a bad sign for FIFA. After all we’re talking about an organization that has made some very dubious choices of its own in the past, and if they’re unhappy being associated with you, even when you’re giving them lots and lots of money, alarm bells start to sound.

The Nobel Peace Center telling FIFA to take their money and shove it is perhaps the most major slap in the face resulting from their latest scandal. This is the Nobel people, you know, the ones that gave Kissinger a peace prize, which is like awarding Dracula Haemophilia of the year, gave Fritz Haber the same award despite him assisting in producing poison gas that killed or maimed millions in WWI, and even had the audacity just not hand one out in 1948 when Gandhi should have won because he was dead.

Not giving Gandhi a peace prize because he wasn’t alive to accept it (having been assassinated that year) is perhaps the most ridiculous piece of officious jobsworth bullshit known to man, but even an organization as mindlessly moronic as this refuses to have anything more to do with FIFA. This is particularly galling to Sepp Blatter, of course, because the little fat Swiss disaster has often hoped to get a Nobel Peace Prize himself. Given the other winners perhaps he had every right to be optimistic, but not anymore.

Sepp Blatter has been trying his hand at passive aggression too this week having started rumors that he might attempt to regain control of the organization from which he resigned. Yes, that’s right, Sepp is even now seeing how much support he can garner from his friends and allies and may well make a bid to return to the Presidency. Now normally I’d make a comic comparison at this point, but there is literally nothing more bizarrely ridiculous than a return of Sepp Blatter to the FIFA Presidency even if you invoke Hitler, Jesus or the Ancient Ones of Cthulhu.

Will The Beast That Is Blatter Bounce Back?

Sepp coming back would be a nightmare even H.P. Lovecraft couldn’t have dreamed up, and that it is even being mooted as an idea in the chattering ranks of FIFA is truly horrific. No one wants to see Sepp come back, and sites like ComeOn! Sportsbook, who are giving those who ignore the anachronistic Swedish gambling laws opportunity to wager on who’ll be the next President, aren’t even giving odds on Blatter being back, but some will offer you 50/1 on Barack Obama getting the gig. The numbers then speak for themselves, and Sepp should listen to them.

Of course people at FIFA rarely listen to anything anyone else has to say and indeed would still be happily wrapped up in their own private world of institutionalized corruption had not the FBI decided to stick its oar in and rock the boat. With Interpol and Nobel both abandoning them in as many weeks the question now arises, who will be next? FIFA has numerous contracts with various organizations and as its reputation continues to frolic in the mud of it’s own making how many of them are in danger?

Whilst the world of football should be concentrating on the Women’s World Cup and Copa America, it is once again doing some navel gazing, which is a shame because they’re both turning out to be fabulous tournaments with some great games already played and some big match ups still to come. The WWC Canadian hosts in the former are taking on the Swiss next, with Australia up against the might of Brazil in the first of the knockout stages. Both games set to be massive.

Sweden’s ladies might be only just tentatively staying in the competition after drawing with each of their group stage opponents but that is to nothing compared to the worry of Copa America hosts Chile whose one win and one draw hardly place them where they wish to be at this stage of the competition, joint top of their group with rivals Bolivia. They play each other next and that will be a match to watch, guaranteed to be more interesting than anything to do with FIFA, that’s for sure.