The Rivalry Between Dortmund and Bayern is Over 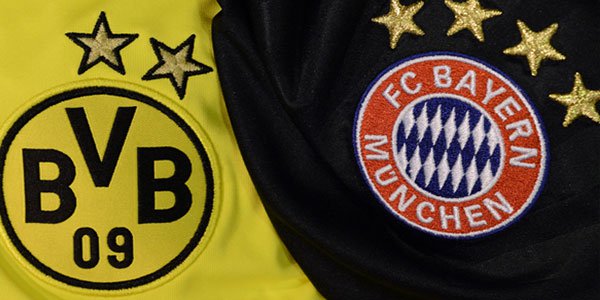 Borussia Dortmund do not have real chances to win the Bundesliga as Bayern are performing faultlessly.

Bayern Munich outstandingly rule the Bundesliga and they have no real challenger in the German first division. Borussia Dortmund used to be a great team but in the middle of this season they were still running away from the relegation zone.

Their form has been improved a lot in recent times, however a win against Bayern Munich would be completely insignificant. It would not be decisive in the league, it would be just a failure for Pep Guardiola’s men which would mean they have 3 points less.

Even Jurgen Klopp believes that Bayern are a far superior team

According to German gambling news, Borussia Dortmund’s team boss declared that the clash between the two historic clubs is not as important as it used to be as Bayern are a much stronger side. The manager said that even though the fact that they believe they can win, the gap between the two teams is just two big.

In addition, he added that the two teams are currently not on the same level. However, this game used to be one of the most important events in German football. Dortmund defeated Bayern twice in 2012 – one of those wins was the infamous 5-2 in the DFB-Pokal final, while the other one lead Klopp’s men to Bundesliga triumph.

However, the Bavarian side took revenge in the next year. These two teams played the final in the UEFA Champions League after Dortmind eliminated Real Madrid and Bayern knocked out FC Barcelona by a humiliating 7-0 on aggregation. And Jupp Heynckess’ men defeated Klopp’s side by 2-1.

Bayern Munich is still one of the first names that comes to mind when talking about the best European football teams. They played semi-finals in last season’s Champions League only to lose on a combined result of 5-0 against eventual champion Real Madrid, who earlier defeated Klopp’s men in the quarter-finals.

In addition, Bayern are still in the race for the most prestigious club tournament this season. FC Porto will be their opponent in the quarter-finals and online sportsbooks in Germany just cannot see Bayern not qualifying to the semi-finals. Their rival is just too much of an underdog for this clash.

Moreover, the Bavarian side rules the league this year too. They are the leaders with 20 wins out of 26 games, losing only twice. They scored 70 goals and conceded only 13 times which is by far the least goal to concede and the most to score. 8 rounds are left of the German championship and Bayern leads by 10 points.

…While Dortmund stopped being an important European football team

Meanwhile, Jurgen Klopp’s men did not manage to strengthen their squad and keep on being a strong team. Last year they got eliminated from the Champions League in the quarter-finals, and this year they didn’t survive the Round of 16 as Juventus defeated them easily by a combined result of 5-1.

In addition, they are currently in the 10th position in the domestic league due to winning only 9 out of their 26 games. In addition, they lost 11 of them and keep a horrible +1 goal difference as a result of conceding 33 goals and scoring only 34. Even though they have been undefeated in the past 8 league games, winning 6 of them.

Borussia only managed to win against the Bavarian side when it did not really matter to much. They played the Champions League final and Bayern won. Last season these two teams played the final in the German Cup as well and Dortmund did not manage to win then either. When there is a lot at stake, Bayern always managed to overcome the pressure. Like a real big team, unlike Borussia Dortmund.

Moreover, Dortmund’s situation is not likely to improve in the near future and they are not expected to bypass Pep Guardiola’s men any time soon. They cannot afford to sign top-quality players and they cannot keep their best football stars. Mario Gotze and Robert Lewandowski already left them for Bayern Munich, whole Matts Hummels and Marco Reus are probably leaving the BVB

Online gambling sites in Spain linked Marco Reus to a move to Spain to play for either Barcelona or Real Madrid. The central defender Matts Hummels was also told many times to leave his current team, his name mostly arises in connection with a Manchester United and a Barcelona move.

Borussia will receive a lot of money for these players but it will be impossible for them to substitute them appropriately. They do not have enough money and they are not competitive enough to attract the world’s best players. Bayern Munich still remains and will remain the ruler of the Bundesliga.