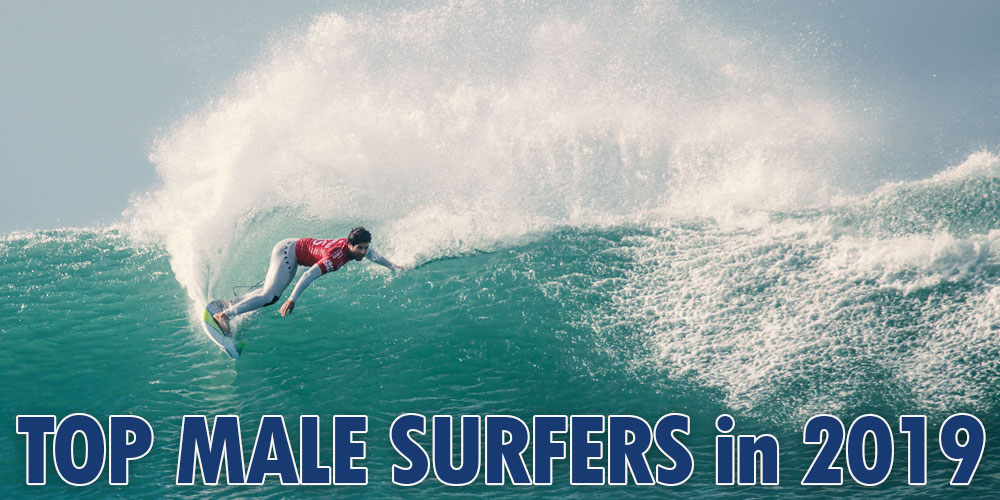 Ever wondered who are the top male surfers right now? Well, names like Kelly Slater or Joel Parkinson might sound familiar even to those who don’t follow surfing actively. However, both of these legends announced their retirement recently. That means aspiring talents have even more chance to shine now. Let’s have a look on the youngest surf talents who are rocking under 30.

Started his rookie season with an aerial attack in 2015. Apparently, his ground game is equally vicious. Indeed, he took the Rookie of the Year award back then. In the following years he had ups and downs as well. In 2018, he found his lucky charm again, winning several races throughout the year. No doubt, he is heated by an intense inner fire.

Ferreira can be a role model for many. Unlike other champions, he grew up in a modest neighborhood. He didn’t even have his own board at the beginning, so he had to borrow one from his cousins.

The plucky Brazilian can surf in almost any weather and water condition. He has the humility needed to be the best one day. Hence, you can’t do anything but love him once you watch his outstanding performance.

Andino is a 24 year old talent, representing the US. Being a second generation pro surfer, his path was marked by his father Dino Andino. Dino was a World Tour competitor, national champion in the early 90s, and a team manager after retiring.

Kolohe accompanied his father in the manager tours, and obviously, those were formative years for the kid. His future seemed predetermined already.

The young Andino has an unbeatable reason for surfing: he simply loves it, and feels amazing after a hard session. Apparently, he managed to sign huge deals with Target and Nike during the beginning of his career. That made him one of the richest rookies in history.

His Japanese parents moved to California, when they learned they are expecting a child. Kanoa’s father was a true fan of surfing and had high hopes for his son. The only reason for the relocation was to provide a surfing possibility for their kid.

Well, all went quite good, the youngster competed in his first surf contest at the age of six. At the age 14, he became the youngest surfer ever to win the US National Championships for under-18s. Igarashi loves competition and challenge pushes him.

“It’s a confidence booster knowing that younger people can still compete on the same level as the top pros,”, he says.

Kanoa recently announced, that he will represent his ancestral home. His decision to change his citizenship for the Olympic gold generated intense debate. Eventually, Japan will host the Olympic event. The host nation automatically receives one slot for the men’s and women’s event. Igarashi wanted to play safe.

Have you seen a a robust body flying on the water? If not yet, then you should check out this Aussie guy named Carmichael. He is probably one of the most talented surfers of the present day. Without doubt, he is a humble and hard-working guy, not someone who loves splurging and showing off.

Above all, Carmichael is super solid in the water. Maybe it’s because of his massive size that he moves 100% confident it the water. Still, he is kind of a hidden treasure, but a real threat to any of the pro surfers.

Due to his low profile, he could not manage to get sponsorship easily. Actually it took many years for him to build a good reputation. His breakthrough finally came in 2015, when he won the Reef Hawaiian Pro. Carmichael takes part in Championship Tour since 2017, and became Rookie of the Year in 2018.

Coffin is not just another American on the Championship Tour. Only 25, he is the highest ranking American on tour. If he wouldn’t be a pro surfer, he would love to be a musician, he finds surfing very rhythmic.

Long before his success, he worked as a boat driver in Fiji. His surfing approach is  power-based, which earned him a solid reputation. Even though he was strongly influenced by the local California icons, his style is 100% authentic.

In 2015 he was close to giving up his effort and dreams to become a high-quality surfer. Surprisingly it was his younger brother who didn’t let that happen. He qualified in that year and he is getting better and better each year.

With his 163 cm height, Asing is the smallest surfer on the tour. He grew up in Hawaii, surrounded by surfing prodigies, what totally inspired him. On the other hand, he had to work extra hard to break out of their shadow.

That quote pretty much describes him and his efforts to get himself a name. Wins never came easy for Keanu, but he got his share anyway. Although he finally qualified in 2015, due to his wicked backside attack and high tempo.

Still, he is learning how to consistently ply his skills. Moreover, he has a strong support from the Hawaiian community. Also, he has an  incredible determination, what is probably the most essential for progression.

Being fortunate enough to grow up in San Clemente, Griffin’s interest for surfing was induced by the community. Participated at the local surf camp run by his parents every summer, he basically grew up in the water. He has been very competitive from day one, according to online sportsbook sites in Australia.

The secret of his success might be his humility beside his talent. He gave up all, and put all his faith and trust in his coach. For that reason, his coach compares Griffin to a sponge for how absorptive he is.

The prodigy is putting into his surfing a lot of work. when you see him riding the waves, you wont be disappointed for sure. Probably he is the youngest in the tour at 20, and he just surfs phenomenal. Arguably, he is the most feared of the rookie class.

Next time when you are guessing the top male surfers, remember these names. Young, talented, and determined, these surfers are having a bright future ahead of them. Follow this year’s Championship Tour and watch the guys riding the highest waves.