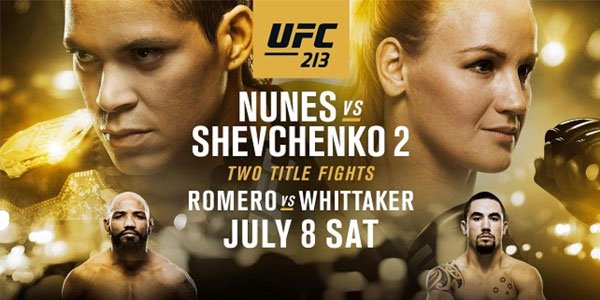 GamingZion’s UFC 213 betting guide will break down the BetVictor betting odds for both the main and co-main events of this weekend’s card.

On July 8th, one of the biggest UFC cards of the year will go down in Las Vegas. In the main event, women’s bantamweight champion Amanda Nunes will rematch top contender and dangerous striker Valentina Shevchenko. In the co-main, two of the best middleweights in the world will face off for the interim title.

Most online sportsbooks in the UK have already set the betting odds for this event. If you like to bet on MMA online, both of the two main fights offer a great chance to cash out. Let’s take a look at the odds.

When Amanda Nunes first began her MMA career in the US, she was seen as a tough, talented and dangerous fighter, but was inconsistent in her success, going just 4-3 in her first 7 fights. After a tough loss to Cat Zingano in September of 2014, the jiu jitsu black belt made some changes to her training routine and began to dominate.

Nunes has gone 5-0 since that aforementioned loss, including a title-winning match in July of 2016. Her striking game has improved leaps and bounds as of late, which she’ll need against a kickboxer on the level of Shevchenko. Amanda won the first matchup with Valentina back in March of 2016, and has even odds of 1/1 to get the win again this weekend.

Valentina Shevchenko is arguably the best striker in the sport of MMA right now. She held a 56-2 record in kickboxing before making the move to mixed martial arts, where she’s accumulated a 14-2 record. Valentina has only lost once in the UFC, and has recorded two straight wins since then over Holly Holm and Julianna Pena.

Towards the end of the first fight with Amanda Nunes, Shevchenko began to take over. Perhaps it’s that reason why she’s listed as perhaps the best UFC 213 betting guide favorite. At the moment, BetVictor lists her odds to win at 4/5.

With current champion Michael Bisping sitting on the sidelines with a knee injury, top contenders Robert Whittaker and Yoel Romero will be battling it out for the interim title. Both these men have racked up incredible win streaks, and even the best MMA betting experts are having a difficult time predicting the outcome.

Robert Whittaker made the move to middleweight in November of 2014, and has since won 6 straight fights in the promotion. In his most recent bout, Whittaker made UK gambling news by knocking out the former number one contender in the second round with a high kick. Our UFC 213 betting guide experts feel Robert winning may be one of the best wagers you can make. His odds are set at 4/5, according to BetVictor.

Yoel Romero entered into the UFC as one of the most accomplished wrestlers in history, but it’s been largely his striking game that has earned him success inside the cage. Last November, he upset hometown hero Chris Weidman with a 3rd round KO, bringing his UFC record to a perfect 8-0. Yoel can end a fight at any moment, but some are wondering when age will begin to affect him, as he’s competing at the highest level at 40 years of age. Still, he’s coming into this fight with even odds of 1/1.

Our UFC 213 betting guide will continue this week to break down a few of the other bouts on the main card. Tell us who you think wins each of the two fights we listed in the comment section below, and make sure to head to BetVictor for a full list of great UFC 213 betting odds, and a wide range of other 2017 MMA betting odds!