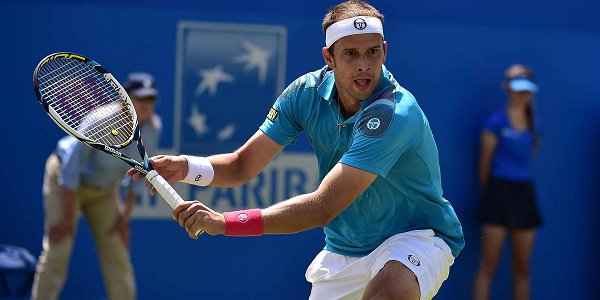 Online betting news in the UK all agreed how Muller had no chance of beating Nadal. However, the Luxembourgian strongly disagreed and proved his views were more correct: Muller was leading 2-0 and Nadal came back to 2-2 from there but Muller did not let that match out of his hands: Nadal lost to Muller to 2-3.

We’ve just complained a few days ago how there hasn’t been any odds-upsetting, unexpected Wimbledon 2017 results so far, and there here it came, just like that. The Luxembourgian tennis player is to face Marin Cilic in the Quarter-Finals. Does he have a chance to beat the favourite once again?

Should you bet on Muller to win Wimbledon 2017?

Common sense dictates only one possible answer to a question like this: GOD PLEASE NO. However, common sense would have dictated the very same answer to the question “Should you bet on Muller to beat Nadal at Wimbledon 2017?” Obviously, you shouldn’t if you hope to win money. Yet you make more money if you do bet against Nadal in this case.

All I’m trying to say is, logic falls behind other aspects when it comes to placing a bet on Wimbledon 2017 matches. Anything can happen at tournaments like this and many things do happen apparently. Can Muller beat Cilic as well? Wimbledon 2017 betting odds at online sportsbooks in the UK hardly believe so.

His odds to win against the Croatian are 4.80 (19/5) at Marathonbet, while the odds for Cilic to beat Muller are only 1.20 at Bet365. Do you believe that Muller will be capable of even more than that, after beating Rafa Nadal? Bet on Muller to win Wimbledon 2017! That, for sure, would be quite the unexpected Wimbledon 2017 result!

The odds for Muller to win Wimbledon 2017 say a lot about his actual chances: 41.00 (40/1) at Betfair. The favourite tennis player to win Wimbledon at online sportsbooks is still Roger Federer, whose outright winner odds are 2.50 (3/2) at BetVictor.

Bet on the rest of the Wimbledon QFs as well!

As mentioned before, there hasn’t been any major Wimbledon surprises part from Nadal’s elimination. Which means that the likes of Roger Federer, Andy Murray and Novak Djokovic are all in the last 8. And it also means that you get to bet on Federer, Murray or Djokovic if you feel like it!

Federer will play against Raonic, and the Swiss will obviously be the favourite to win. His odds are 1.22 (2/9) at Coral Sportsbook. Andy Murray will play against Sam Querrey, while Novak Djokovic will face Tomas Berdych. Should we expect another unexpected Wimbledon 2017 result, or will the favourites qualify for the semi-finals? Let us know what you think by leaving a comment below!