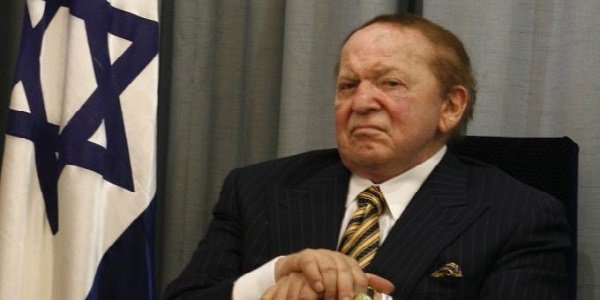 It always pays to be careful what you say and Mr. Sheldon Adelson may well have learned that lesson after some of his comment provoked a practical Iranian response

It reads, in no small part, like the plot of one of those cheap thriller novels that you only ever find in airport book kiosks and that always combine a symbol of tyranny (swastika, soviet star, etc) with a woman wielding a gun who, despite being evidently capable of extreme practical deadly violence, is nonetheless wearing impractically scanty clothing for any situation in which use of the gun might actually be necessary.

It has all the right ingredients, a super-rich reclusive, some would say malevolent, individual who’s trying to manipulate the laws of the land to suit his own narrow agenda of gain, a group of culturally misunderstood foreigners hellbent on causing chaos, and a whole bunch of techno-babble of the sort you’re vaguely aware of because you use it daily, but couldn’t really explain to anyone else even if your life depended upon it.

It begins with the 22nd wealthiest person in the world turning up to take part in a panel called “Will Jews Exist” held at the Yeshiva University campus in Manhattan. When someone with over $27 billion dollars pops up to give his opinion – he’s an extremely hawkish supporter of Israel – people tend to listen and it was a packed house that were gambling news stories of recent months would spur the 81 year old Sheldon Adelson to say something interesting.

They were not disappointed. Sheldon Adelson, luxury casino owner, operator and developer who has built up the largest gambling company in the world, with interests as far from Vegas as China and Singapore, who is a friend of the Israeli Prime Minister, Mr. Benjamin Netanyahu and who is a well known supporter, and more importantly donor, to the rightwing of US politics, particularly the Republican party’s candidates, was about to say something worth hearing.

As a business man Mr. Adelson doesn’t really understand the concept of democracy in the same way the rest of us do. We believe democracy is a process whereby the most popular policies and concepts of various political parties are touted and we choose the best of a bad bunch to make the decisions for us until the next election. Mr. Adelson believes he should just spend money on electioneering till the people he likes wins and then make them do what he says because he paid their way to power.

Popularity is not a concept Mr. Adelson has much time for, beyond the obvious necessity to attract punters to his casino gaming floors, and when it comes to his political views he might just suffer from a lack of diplomatic forethought brought on by not caring much what people think of him. There’s much evidence for this lamentable illness of his, not least his ridiculously greedy and self-interested desire to ban internet betting in the US.

His attempts to get an old anachronistic law re-instated that would prohibit gambling on the internet have thankfully failed to gain any traction in a congress so gridlocked it can barely agree a lunch menu, but his efforts, and bankroll behind those efforts, know few limits, and he won’t be happy till he changes US gambling laws till they outlaw all gambling save visiting the casinos of Mr. Adelson, and that direct unashamedly greedy self-centered approach to business seems to have carried over into his views on Israel…….and particularly it’s relation with Iran.

“What are we going to negotiate about?” Adelson asked rhetorically. “What I would say is, ‘Listen. You see that desert out there? I want to show you something.’ ” At which point he said he’d detonate a nuclear weapon in the Iranian desert that “doesn’t hurt a soul. Maybe a couple of rattlesnakes and scorpions or whatever.” The implication behind his demonstration would be that the next detonation would be in Tehran if Iran didn’t scrap its nuclear program. “You want to be wiped out? Go ahead and take a tough position.” He challenged finishing up his remarks.

The Iranians were not pleased with this attitude, with the Ayatollah Ali Khamenei saying America should “slap these prattling people in the mouth” which is a lovely thought but probably falls foul of not truly understanding the whole “freedom of speech” concept the US is so big on, unless you’re being critical of the US. However this amusing mental image presented by Mr. Khamenei was not to be the only reaction from the Iranians.

According to recent reports the Iranians decided to hit the man who’d threatened them with genocide where he lived, metaphorically, and took as a target for their wrath, that that he holds close to his cold-dead heart. Las Vegas. Particularly the Sands casino interests in the city, but rather than send in the missile equipped UAVs, or an armored brigade of paratroopers, the Iranians decided to add insult to injury and use that that he hates most against him. The Internet.

Early on February 10th the IT department of the Las Vegas Sands Corporation was in melt down. Networked computers were going down, their hard drives getting wiped, their function negated and the whole empire that runs on the same technology Mr. Adelson hates so much, slowly broke down and failed. The company was under a sustained and persistent cyber attack that left IT workers dashing through the many properties in the company unplugging computers from the network as fast as they could.

The nightmare had come true. Someone somewhere was simply hacking their system and not allowing them to continue usual business function and it was quite a while before they regained control, and even more time before things got back to normal. Who was behind this attack? Yup, you guessed it. The Iranians. It would seem that in the modern world the internet has granted us many opportunities, but also comes with many dangers and pitfalls………just ask Sony.