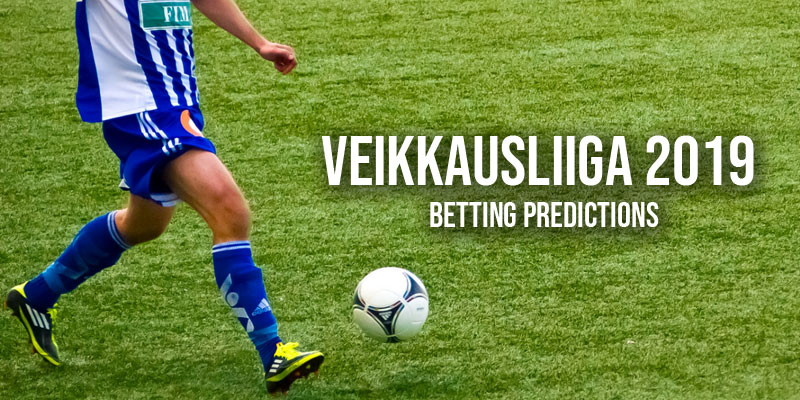 Although HJK are the favorites to win Veikkausliiga this year, they’ll definitely face some difficulties along the road. It really looks like FC Honka and Ilves could actually cause them a lot of problems this season. In this article, we took a closer look at the best Finnish teams and made our Veikkausliiga 2019 betting predictions for you.

Our Veikkausliiga 2019 betting predictions show that this year could be interesting for gamblers who like to bet on Finnish football. It’s not just because the biggest club of the country may face problems, while the other contenders are getting stronger. It’s also going to be exciting because the league has adopted a brand new format for this season.

There are 12 clubs in the first division in Finland. They’ll play 2 games against each other, one home and one away. Then, they are going to be split in two groups. The best six teams will compete in the so called Championship Series, where they’re going to fight for the title and to qualify for Europe. The other six teams will fight for the 7th spot. The teams who finish 4-7th are going to have a mini tournament (play-offs) for the last Europa League qualification place.

We’re really excited to see how this new system will look like, and we’re sure this season’s going to be more nerve-wracking than the previous ones. It’s definitely hard to pick a club to bet on before such a long year. However, we took a look at the odds of some of the best teams in the country and made our Veikkausliiga 2019 betting predictions for you.

Though HJK are the favorites, it’s not going to be an easy year for them

Online sportsbook sites in Finland believe that Helsingin Jalkapalloklubi are the favorites to become champions this year. This isn’t surprising at all. HJK managed to win the league 8 times in the last 10 years – including the previous 2 seasons. They’re arguably the biggest club in the country: they’ve won 29 titles so far, which makes them the most successful team on a domestic level.

Last season, their key player was Klauss, the Brazilian-born striker, who managed to outscore everyone in the league with his 21 goals. The only problem is that the 22-year-old forward was on loan from Hoffenheim, and by now he’s already left Finland. HJK’s most important duty this winter was to replace him somehow, and they did sign Marco Bueno on a free transfer.

The 25-year-old Mexican striker has a great CV, he played for Chivas, CF Pachuca and many other clubs in Mexico. However, he didn’t actually spend too much time on the pitch, while he only scored about 20 professional goals in his career. That’s obviously not a great number for a forward. If he’ll manage to perform in Finland, happy days. However, if he turns out to be an inconsistent, unreliable striker, HJK could have problems up front, which could cost them the title this year.

FC Honka and Ilves could also challenge for the title

Unibet Sportsbook believes that FC Honka could be the biggest challengers for the title, apart from HJK. It’s actually interesting, because the Espoo-club has never won the league before. Last year they finished 4th, but in 2019 they have a great opportunity to make history.

Though they’ve lost Macoumba Kandji, their top scorer from last season, they’ve managed to keep their other key player, Borja Martin. They also signed the former MLS player Luis Silva, Abel Suarez from the third division of Spain and Gideon Baah from FK Gomel. They’ve got a great manager as well, Vesa Vasara. The former Finland international could make a real impact on this team. In general, FC Honka is a club you should pay attention to if you bet on football in Finland.

Our Veikkausliiga 2019 betting predictions also show that there’s another side in Finland to pay attention to: Ilves. They’ve started the season very well, and they could also mean some serious threat to HJK’s reign. The Tampere-team finished 5th last season, but everyone expects them to do a lot better this year. That’s mostly because of their manager.

Jarkko Wiss is a real legend in Finland, who has 40 appearances for the national team, played in England and Scotland as well in his senior career. Being a local lad in Tampere, the fans love him. It could be wise to place a cheeky little bet at Unibet Sportsbook on Ilves to win the title, as it could be quite profitable. Just make sure you do that before they actually start climbing the table.