Was Nicki Bille Nielsen’s Goal Celebration A Sign Of The Times? 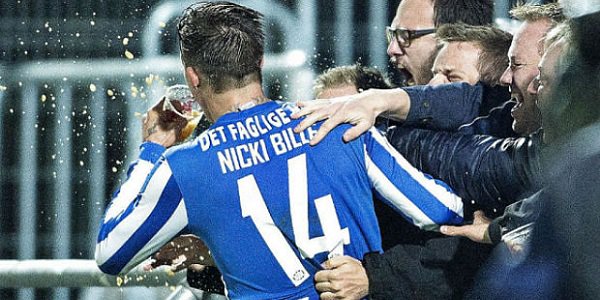 There was something kind of sweet about Nicki Bille Nielsen’s goal celebration. Perhaps it was the juxtaposition with his fierce look of concentration beforehand, perhaps the evident rapture of the fans, perhaps just the empathy we can all feel for a thirsty man, but whichever just why has it garnered so much attention from the press? And what does that say about sport as a whole in the 21st century?

Moments that highlight just how far corporatism has engulfed the world of sport aren’t actually all that difficult to find. Most post match interviews are perfect examples where barely educated thugs who spent their entire childhood playing football suddenly adopt the manner and speech patterns of a public relations consultant who has a lawyer whispering in one ear and a press agent in the other. Their sanitized robotic performances a stark contrast to their on-pitch persona.

Five minutes ago they were biting someone’s ear off or committing professional fouls and then passive-aggressively pretending they’d not even touched the guy sprawled on the ground at their feet all whilst swearing in terms that even sailors would blanch at, now they’re a diplomat? It doesn’t just not ring true, it’s almost insultingly dishonest. Corporate owners expect such things, the rest of us are just embarrassed. It’s like watching a reluctant kid perform a party piece at a family gathering only worse.

As those that like to bet on sports in Denmark at Ladbrokes’ Denmark casino, will already have spotted, corporate ownership, or indeed sponsorship, has begun to suck the very humanity out of sports stars, it now being almost impossible to recognize one from another, their predictable reactions and comments standardized by the expectations of big money. This means that when someone comes along with a little individuality the media flock to them in hopes of getting a quote that hasn’t been sanctioned by the legal department or learned during a public relations training course.

The process of building up then knocking down such people is bread and butter to the press, today’s fresh young superstar is tomorrow’s headlines about prostitution, drug abuse or road rage violence, their sporting conduct so heavily influenced by the profiteers that only their personal lives remain as fodder for the tabloid beast. Thus when a star during a game visibly behaves counter to the template the media tend to go a little insane, as they did recently with Dane Nicki Bille Nielsen’s goal celebration.

A Well Deserved Moment Of Relief

Nicki Bille Nielsen’s goal celebration was well deserved. His team, Esbjerg had gone two down in the first half, snatched one back in the second and were now deep into injury time (the 94th minute) and he’s stepping up to take a penalty that would give them a much needed draw away against fellow Superliga relegation candidates Hobro. His concentration was manifest, his jubilation when the ball hit the back of the net entirely understandable, but rather than fixate on the Roy of the Rovers sporting moment, the press concentrate entirely on what he did next.

A man gets thirsty after saving a point for the team..

I’m gambling news that Danes like a drink isn’t actually news to anyone, it certainly won’t be to anyone living in Denmark, and so Nicki Bille Nielsen’s goal celebration shouldn’t really shock anyone. Penalty scored he rushes to celebrate with ecstatic fans behind the goal, grabbing from one a plastic mug of beer and (according to much of the press) “necking” it. The truth is, frankly, he more or less tipped it over his face with his mouth open, but even so, it was so out of the norm it got noticed.

With at least one news outlet running a poll on whether or not he should have been sent off (are you kidding me) and others asking if Nicki Bille Nielsen’s goal celebration were the best in the world you get the sense that the media have little idea whether to demonize or laud his behavior, this is because we sports fans don’t particularly care and are unlikely to be persuaded to do anything more than smile momentarily at his alcohol related antics.

However, “Craziest celebration of the week” definitely goes to Mariano Gorosito from Argentina

Perhaps if he’d rolled a joint or started jacking smack Nicki Bille Nielsen’s goal celebration would have be different, even a slug of vodka would have been over the line, but lager from a football stadium bar? The alcohol content was probably less than seawater. Those calling for him to be sanctioned thus need to get a grip and stop being so po-faced about sportsmen, those of us that bet on them don’t mind that they’re human, if we did robot-wars would be the most popular sport on the planet.

So what does the reaction to Nicki Bille Nielsen’s goal celebration say about the future stars of sport? When out-spoken individualists like Ibrahimovic are all but stalked, their jokes purposely taken out of context, their families hassled by paparazzi, future football stars may wonder if it is all worth it, if sacrificing so much of their own humanity can be offset by the possible fame and fortune. Will players like Armend Aslani, currently at Brondby, be able to live so schizophrenically?

The 17 year old is touted as being one of the best young talents in Denmark today and Tottenham have approached the Danish side about a transfer in January, at what is thought to be a cost of around three hundred and fifty thousand pounds. This will mean that those who take advantage of Danish gambling laws to back Spurs in the English Premier League might have one of their own to urge on, but will the corporate stonewalling required from facing the invasive British press be as easy for the striker to manage as he does playing on the left-wing?

Nicki Bille Nielsen’s goal celebration has been so noted because of it being such an aberration, unlikely to happen on a regular basis (although that said he personally might often find drinks offered to him when he scores from now on) just one man demonstrating a little fragment of true character in an unguarded moment of joy and relief. Doubtless it will now become part of the training players get from the PR people, probably part of a montage called “Things you shouldn’t do”, which is a pity, because sport as a whole needs moment of humanity like Nicki Bille Nielsen’s goal celebration more than ever.

Both Nicki Bille Nielsen’s and Armend Aslani’s teams are in action this week, against each other, and those with an interest can find 1.90 on Brondby to win, with Esbjerg at 4.30 and a draw garnering a rather unlikely 3.60 at ComeOn! Sportsbook. Tottenham meanwhile have a far closer game on their hands getting just 2.60 in their clash against Swansea who are at 2.75, although there too a draw seems an outside bet at 3.40. Nielsen’s odds of scoring are 4.00, his odds of getting a drink from the fans if he does are alas not quoted.