Will USWNT’s Crystal Dunn sparkle at the Olympics? 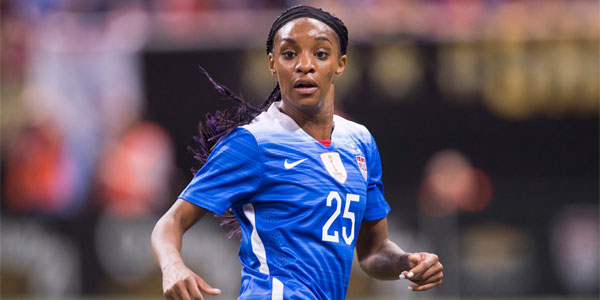 The US Women’s national team didn’t even pick Crystal Dunn for the 2015 Women’s World Cup. However, this year’s USWNT’s Crystal Dunn selection was simple: she looks set to be a star of the tournament.

While online sportsbooks have the US as clear favourites to be crowned champions of women’s soccer at Rio 2016, we don’t know yet who will be star of the tournament. Carli Lloyd stole the show in the final of the the 2015 World Cup, and is currently FIFA World Player of the Year. She’s also USWNT co-captain, aiming for a third Olympic gold.

However, she’s now 34 and it’s time for a new star to arise. That star could be USWNT’s Crystal Dunn, the 24 year old winger playing for Washington Spirit. Though she wasn’t picked in 2015, she has pedigree. She won the 2012 U20 Women’s World Cup in Japan and the same year was awarded the Hermann trophy celebrating the top US college soccer player. In 2015 she was deemed the National Women’s Soccer League’s MVP, and also picked up the Golden Boot Award. Only 23, she was the youngest winner of both awards.

While Dunn reportedly only narrowly missed out on selection for the World Cup last year, she’s massively improved her game since then. At that point, and for much of her career, she’d been seen simply as an attack-minded full-back. She has since moved forward, becoming a far more attacking player; effectively too, as evidenced by her Golden Boot award.

If you want to a bet on sports in the US this summer, USWNT’s Crystal Dunn to be top scorer in the Olympics could be a good one. Record goalscorer Abby Wambach won’t be there, two other US forwards competing for goals – Sydney Leroux and Amy Rodriguez – will both be missing due to pregnancy. She has a great goalscoring record for the national team, with 14 goals in only 35 appearances including a five goals against Puerto Rico. She also scored a terrific winner against England, third place in the World Cup last recent, in the SheBelieves Cup.

Now released from defensive duties, she can shine thanks to her pace and power, as national team coach Jill Ellis described: “She’s got such quickness and athleticism, and her ability to separate is special ”. Despite her short stature (she is only just over five feet) she escapes defenders with her quick burst of acceleration, and impressive agility. With her history in defence, she also provides the national side with crucial versatility: the only outfield positions she hasn’t played for the USWNT are centre back and defensive mid.

The US will field a fast and skillful attack for the Olympics, and Crystal Dunn could play a key role. Though this season she has been scoring less for her club, she’s still contributing through improved creative play. If you’re looking for a surprise star of the Olympics, USWNT’s Crystal Dunn could be it. Remember on the Woman’s Olympic football tournament at online sportsbooks in Brazil, and keep reading GamingZion for more Olympic previews.