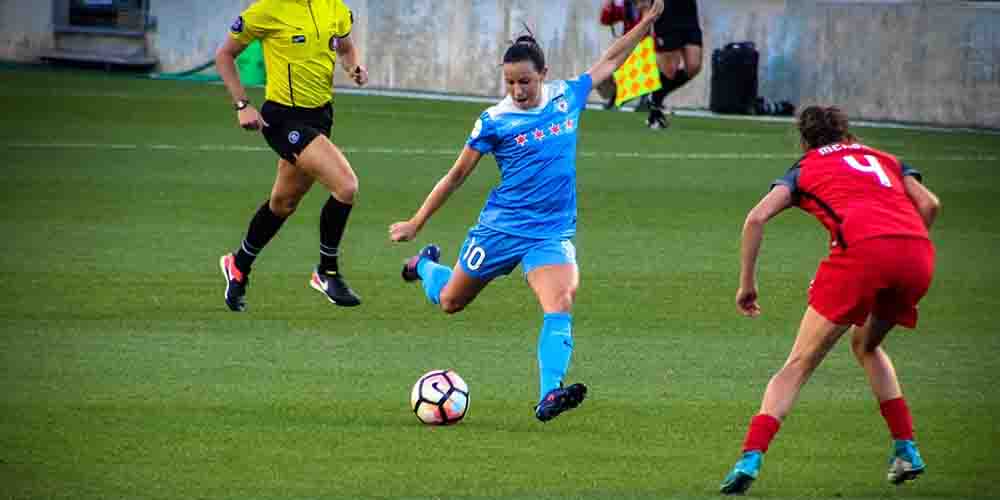 Disputes about who is better, men or women, even in sports, have been going on for many centuries. But let us not forget the following facts. First, due to differences in genes, men are naturally stronger than women. Second, reports from the Olympic Games since 1983 show that male athletes outperformed women by an average of 10% . These facts suggest that athletics, for example, may be the kind of sport where men enjoy a clear and significant advantage over women. But still, there have been several cases in history when women took over men in sports and even in some disciplines of athletics. Here are 9 of the most memorable moments of  women beating men in sports.

Sonya Thomas, a thin Korean American, doesn’t look like a girl who eats a lot. But she is on the top of the list of the best eaters in the world. She was even nicknamed the “Black Widow” because of the regularity with which she defeats men who are five times her size. In 2003, Thomas won the Buffalo National Wing Festival, She competed against the men and won by eating 134 wings in 12 minutes and earning 6 more titles in 2004 and between 2007 and 2011. But she didn’t stop there and made a splash in the Nathan’s Famous Hot Dog Eating Competition. She never won there, but in 2004 she swallowed 26.5 hot dogs in 12 minutes.

Jackie Tonawanda, nicknamed “The Woman Ali,” was one of the pioneers of women’s professional boxing in the 1970s and 1980s. She became one of three women to successfully win a case against the New York State Athletic Commission, which licensed boxers. Jackie reaffirmed her legendary status on June 8, 1975, when she became the first female boxer to be allowed to fight at Madison Square Garden. Her opponent was Larry Rodania. Even more striking, Tonawanda won the bout by knockout in the second round. Also, check out our article about how to find the best way to bet on boxing. 1xBET Sportsbook is a great choice to place your bet.

Even as a child, American Julie Crown was already an experienced rider. She dreamed of becoming a professional jockey. And on January 30, 1981, Crown took a step towards realizing his dream, making his debut in the Tampa Bay Downs in Florida. Just two weeks later, Julie won her first race, establishing herself as a rider. In 1993, Crown achieved what no woman had ever achieved before; she won the Belmont Stakes at the Colonial Affair. This success made Julie the first female jockey to win the Triple Crown. She is inducted into the National Horse Racing Museum and Hall of Fame, the National Women’s Hall of Fame, and the Horse Riding Hall of Fame. But Julie didn’t stop there. In 2003, Crown became the first female jockey to win the Breeders’ Cup in Santa Anita.

In July, the sun over Death Valley, California, is destructive and deadly. But this weather is considered ideal for one of the most difficult marathons – Ultramarathon Badwater. The marathon is over 217 kilometers long, starting at Badwater, the lowest point in North America, and finishing at Mount Whitney. Due to the harsh conditions, Irina Reutovich’s record of 29:48:27 in 2000 was considered unattainable. Therefore, 41-year-old Pam Reed, an experienced marathon runner, took a very long time to take part in the race.

However, when she did so in 2002, and came first, and broke Reutovic’s record by 1 hour and 52 minutes, everyone was shocked. In addition, the next competitor crossed the finish line in more than 4 hours. And Pam proved it wasn’t a fluke by winning the marathon again in 2003.

5. Bowling: Kelly Kulik at the 2010 Tournament of Champions

On June 4, 2006, in New Jersey, Kelly Kulik changed history by becoming the first female bowling player to be admitted to the Professional Bowling Association (PBA) so she could compete in any PBA competition during the 2006-2007 season. Shortly thereafter, Kelly set a goal for herself to be the first woman to win the PBA title. And Kulik did it at the 2010 PBA Tournament of Champions. Kelly qualified for the tournament by winning the inaugural PBA Women’s World Championship and proved her ability to compete in the prestigious competition, beating Chris Barnes 265-195 in the final. After the historic victory, Kulik beamed: “Obviously this is a turning point in my career and women’s sports in general, but I really would like this sport to benefit from my victory.”

Do women fight men? Sounds strange, to say the least. But in 2005, 17 women were eligible to participate in wrestling championships, where men also took part. However, Mikaela Hutchison of Anchorage, Alaska changed history in 2006 by becoming the first female wrestler to win a national championship with a male. She got into the sport thanks to the brothers, two of whom were titleholders before Mikaela became. However, it came as a surprise to the Hutchinsons when Michaela was able to win the final in just 16 seconds. Her victory itself was not so surprising as she entered the tournament as the No. 1 wrestler in her weight class. Hutchinson finished the season 45-4.

Equestrian sport is one of two Olympic sports in which men and women compete against each other on equal terms. A girl from the Netherlands named Anky van Grunsven managed to win gold at the Olympic Games three times in a row (in 2000, 2004, 2008). Even more surprising, Van Grunsven won her second gold medal in 2004 in Athens when she was pregnant with her first child. She gave birth to a child that same year. And in the following years she increased the number of her Olympic awards. To date, she has 3 gold, 5 silver, and 1 bronze medal in seven consecutive Olympics. Make sure to also read our article about showjumping where we explained everything related to Equestrian sports.

By the time Danica Patrick was named Rookie of the Year at the Indianapolis 500 in 2005, the racing world knew this woman was already a champion of sorts. However, it took several more years for the Wisconsin-born American to finally reach incredible heights. It happened on April 20, 2008, at the Indy300 in Japan. She finished five seconds ahead of Helio Castronevis. Danica became the first woman to win an IndyCar race. You can bet online on your favorite boxer by visiting the online sportsbook sites in the US. At 1xBET Sportsbook, you can find the best odds and not worry about security.

Before his retirement in 1951, Bobby Riggs was one of the best tennis players in the world with six major titles. He was also recognized as the number 1 tennis player for three years. However, even after Riggs stopped playing, he continued to remain in the spotlight focusing on the sport’s progress. But all his life he believed that in tennis a man will always be much more successful than a woman. And at 55, he said he could beat any top female player. He was able to confirm the words by beating Margaret Court, then the No. 1 tennis player, in a match that took place on May 13, 1973. However, Billie Jean King, another top female player, forced Riggs to change his mind, beating him 6-4, 6-3, 6-3 on September 20, 1973.

So these were the 9 unforgettable moments of women beating men in sports. Don’t forget to check out the safest online gambling sites in the US for more competitions and the best betting odds.