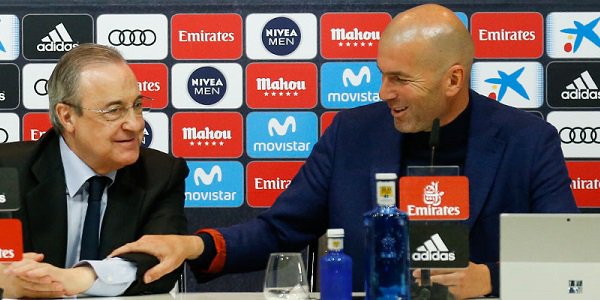 Online sportsbook news sites in Spain seemed to be having a light day today up until the moment when Zidane announced an urgent press conference together with Real Madrid president Florentino Pérez. Some thought he will just announce his contract renewal but the French football expert actually announced it was time to leave Real Madrid.

Zidane’s reason was pretty simple. It was obvious that the disappointing form they showed in La Liga and the Copa del Rey highlighted the fact that the team needs a change. Zidane said the team won’t be able to keep on winning with him on the bench, that’s why Zidane left Real Madrid. However, as he said, it’s not forever, he is sure of coming back one day.

It would have been the perfect story to end his career lifting the World Cup trophy for his nation. However, that’s not how it happened: he headed Materazzi, got sent off and had his team lose the final on penalties. Zidane didn’t want to make the same mistake as a manager as he did as a footballer. He leaves when he’s on top of the world and will be remember as best of the best.

Where will Zidane go next?

As a young manager, he will have tons of possibilities to go on with his life as a top football manager, especially with his name. In addition, he’s one of the few managers who have won 3 Champions League trophies and he’s the only one who has done it in only 2,5 seasons. He will surely be able to choose between the best options.

France national team could easily become his next step, so you might want to pick the Zidane being next France manager at online sportsbook sites in Spain. PSG just announced a new manager, Tomas Tuchel, but should he fail to win the Champions League, PSG are likely to want the legendary French man as well.

Zidane will have tons of opportunities to continue as a manager at one of the best clubs or national teams in the world. However, he said earlier today that he will take a gap year: no team should try to find him for the next season. He needs a break to clear his head after 2 and a half years of constant success with Real Madrid.