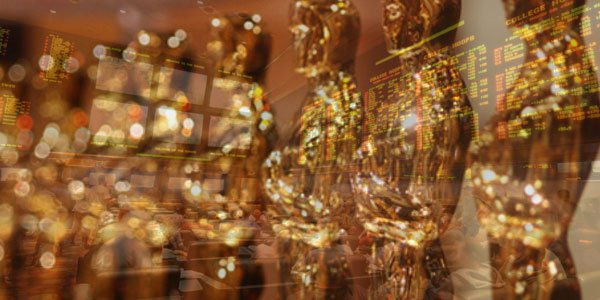 2014 Academy Awards betting is well under way at a variety of land-based and online sportsbooks delivering hot odds.

With the 86th Academy Awards ceremony just around the corner (March 2nd), a variety of sports betting destinations both brick-and-mortar and online are offering a wide selection of betting odds. Most categories are covered with betting lines, and in some cases entertainment betting is actually hotter than the competition itself.

Representing only a small part of the betting industry, entertainment betting is nonetheless an important business. Odds are being offered for the biggest events such as various industry awards, but the biggest TV talent shows are also public’s favorites to wager on.

While men are mostly interested in betting on sports, it’s women who prefer to wager on entertainment betting. The odds are not only limited to the categories winners, but also include such peculiarities as who’s dress is going to be worn by a given actress, or how many nominations can a specific movie or a person achieve.

The most important Oscars categories

Naturally, every Academy Awards category is important, and to win an Oscar is a big deal in both the movie business and in general. However, there are some categories that have traditionally enjoyed more popularity and thus more spotlight with the media and entertainment betting industry.

This award has been given out since the very beginning (1928) and is one of the most prestigious ones if not the most prestigious. Every year there’s a huge fight to win this awards, and while sometimes the winner is more or less clear right after the nominations, sometimes it all goes done to the wire.

This time around the nominees are: American Hustle, Captain Phillips, Dallas Buyers Club, Gravity, Her, Nebraska, Philomena, 12 Years a Slave, and The Wolf of Wall Street.

According to the betting lines at Bovada online sportsbooks, 12 Years a Slave is by far the favorite to win the category with a line of 1.18. While Gravity and American Hustle trail with 5.00 and 16.00 odds respectively. The Dallas Buyers Club is next with 21.00 odds, and The Wolf of Wall Street got 36.00 to win Best Picture Oscar. Captain Phillips and Her trail with 151.00 odds each, while Nebraska and Philomena are last in line with 201.00 odds to win the category.

Best Actor in a Leading Role

This category is also one of the original ones, dating back to 1928, and one of the most popular as well. Daniel Day-Lewis has the most wins in this category collecting the Oscar in 1989, 2007, and 2012.

There are also actors, who have never won an Oscar, but who enjoy great popularity among public. Leonardo DiCaprio has been nominated 3 times, but is yet to take a statuette home. He’s perhaps the most well-known target of ridicule in this respect from the fellow actors and the public. But maybe this is his year.

The 86th Academy Awards for Best Actor in a Leading Role have the following nominees: Christian Bale for the American Hustle, Bruce Dern for Nebraska, Leonardo DiCaprio for The Wolf of Wall Street, Chiwetel Ejiofor for 12 Years a Slave, and Matthew McConaughey for Dallas Buyers Club.

Matthew McConaughey is the clear favorite at Betway online bookies to win his first ever nomination with 1.20 odds. It’s Leonardo DiCaprio’s third nomination and his chances are valued at 6.00. Chiwetel Ejiofor has never been nominated for the prestigious award before, but he got a line of 8.00 to win. First-time nominee, Bruce Dern got a 51.00 chance of winning, and the least favorite to win is Christian Bale with 81.00 odds, it is also his first ever nomination.

Best Actress in a Leading Role

Just like Best Actor, the female category is also one of the most prestigious ones and has been around forever (since 1928). The absolute record holder in this category is Katharine Hepburn with her 4 Oscars, more than any other actress or actor. A whole array of actresses has 2 Oscars, but the leader in nominations is Meryl Streep with a whopping 15 including one this year.

• The best odds for Oscars at online sportsbooks

• Betting lines for most important categories

• A trip down memory lane looking at past winners

Cate Blanchett has been nominated three times, but is yet to win a statuette, although she has one for Best Supporting Actress. Blanchett is the favorite to take an Oscar home this year, with Ladbrokes online sportsbook giving her 1/25 odds. The rest of the field is way behind with Amy Adams getting a line of 14/1 for her first nomination. Sandra Bullock already has an Oscar, and she’s got a 25/1 chance of winning this year.

Judi Dench has been nominated 5 times for Best Actress and already has an Oscar for Best Supporting Actress, her chances this year are valued by Ladbrokes at 33/1 odds. The least favorite this year is Meryl Streep with 66/1 odds, but let’s not forget that she already has 2 statuettes and 15 nominations for Best Actress.

Also an important category, Best Directing, features prominently among 2014 Academy Awards betting odds. John Ford has won the most Oscars in this category – 4 with 5 nominations, William Wyler has been nominated 12 times, but only won 3 times. You’d be surprised that Woody Allen holds only 1 Academy Awards with 7 nominations, but then again Francis Ford Coppola has been nominated 4 times and has only won once.

This time around the nominees include David O. Russell for American Hustle, Alfonso Cuaron for Gravity, Alexander Payne for Nebraska, Steve McQueen for 12 Years a Slave, and Martin Scorsese for The Wolf of Wall Street.

The Award for Best Original Song is being given out since 1934, and is also one of most favorite categories in the eyes of the public and online sportsbooks. Sammy Cahn has been nominated a whopping 26 times before, and has won 4 Oscars, Alan Menken, Johnny Mercer, and Jimmy Van Heusen also boast 4 statuettes each for Best Original Song.

This year the nominees in this category are Pharrell Williams for “Happy” in Despicable Me 2, Anderson Lopez and Robert Lopez for “Let it Go” from Frozen, Karen O and Spike Jonze for “The Moon Song” from Her, and Paul Hewson, Dave Evans, Adam Clayton and Larry Mullen, better known as U2, for “Ordinary Love” from Mandela: Long Walk to Freedom.

The favorite to win at Unibet sportsbook is “Let it Go” with 1.17 odds, then comes “Happy” and “Ordinary Love” at a line of 7.00 each, and the last one in line is “The Moon Song” with 34.00 odds. Out of all nominees this year only the members of U2 have been previously nominated for an Academy Award.

This year the Oscar will go to one of these: The Broken Circle Breakdown from Belgium, The Great Beauty from Italy, The Hunt from Denmark, The Missing Picture from Cambodia, or Omar from Palestine.

As for the Oscars odds at the bookies in this category, The Great Beauty is the number 1 favorite with 1.25 odds from Bovada, Italy had 28 nominations and 13 statuettes before. The Hunt is right behind them with a line of 4.50, Denmark had 9 nominations and 3 wins before. The Broken Circle Breakdown is next with 7.50 odds, Belgium has never won before, but has been nominated 6 times. Further down the line is Omar at 34.00 odds, Palestine has only been nominated once before, but never won. And the last one is The Missing Picture with 51.00, Cambodia’s first ever Oscar nomination.

Enjoy Oscar betting at your favorite online sportsbook, and experience the fun of live betting, while watching the ceremony streaming live from Los Angeles.