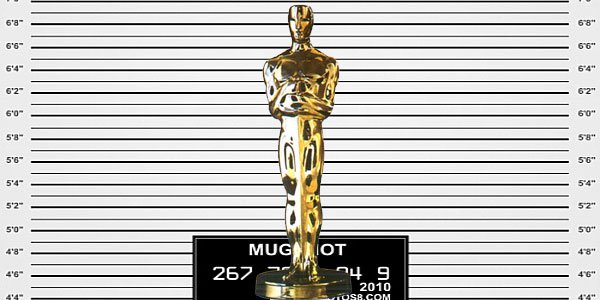 Which Oscar winners or nominees have criminal records? Let’s take a little trip down memory lane.

Amidst all the buzz surrounding the upcoming 86th Academy Awards, the media is trying to come up with juicy details about the most prominent nominees. While their personal and public lives have already been crammed with necessary and unnecessary attention, some reporters are now looking at whether any of the nominees have criminal records.

Perhaps the most famous Academy Award winner with a criminal record is Jack Nicholson. He is the holder of 2 statuettes and 8 nominations. Back in 1994, Nicholson was charged with assault and vandalism after he attacked Robert Blank’s car with a golf club in Los Angeles. They dropped the charges later on, after Blank and Nicholson reached an agreement. According to rumors, this agreement involved a half a million dollar cheque.

Another famous actor with a record is Russell Crowe. He’s a 1-time winner and 3-time nominee. Crowe is renowned for his bad temper and was involved in several scuffles and brawls. In June 2005, Russell Crowe was arrested and charged with second-degree assault in New York City. It all happened following a phone-throwing incident at Mercer Hotel. The lawsuit was settled before it went to trial.

Oscar Winners Who Were in Prison – Nick Nolte

The man with one of the longest Hollywood careers and two Oscar nominations, Nick Nolte, is also renowned for troubles with the law. His record contains an arrest for selling counterfeit documents, a charge for which he received a fine and a hefty 45-year suspended jail time. And then there’s the usual array of DUI and drug charges. Most actors get charged with that at some points of time, so I guess that’s fine.

As for the directors, the most renowned Oscar winner (and 3-times nominees) with a criminal record is Roman Polanski, of course. We all heard about his sexual abuse case. It happened back in 1977. He was arrested and charged with five offenses against 13-year-old Samantha Gailey. Polanski pleaded not guilty to all five charges. However, later on, he went on to accept a plea bargain to a lesser charge. The director fled to London in 1978 and hasn’t been in the USA since.

His case was not all forgotten. Polanski was arrested in Zurich in 2009 on an outstanding 1978 USA arrest warrant. The US tried to extradite the director, but by July 2012, the Swiss court rejected all requests and released him from custody. Big shots of the movie industry have already written countless petitions asking to pardon Polanski. Nevertheless, since he fled the country before sentencing, legally he still has to answer for all charges.

Nominated seven times and already having an Oscar under his belt, Woody Allen has also gotten himself into trouble with the law. While not yet charged nor convicted, the famous director could still face criminal prosecution for alleged sexual assault of his step-daughter, Dylan Farrow. And although the alleged crime happened over 20 years ago, the allegations are very real. In fact, they can lead to criminal charges for Allen.

The same cannot be applied to Oscar winning actresses. The fairer sex is less prone to criminal activities and subsequent charges. And while we can mention Lindsay Lohan and Paris Hilton with their countless DUI and misdemeanor charges, these actresses, how shall we put it, are far from winning a statuette.

Oscar Nominees and their Criminal Records

Now what about the fresh candidates to enter the famous Oscar club? Have they been seen or alleged of a crime? Out of all nominees in the most important categories, only two actors, going for the Oscar this year have something to do with misbehaving.

Christian Bale is going for an Academy Award for his role in American Hustle this year. The Batman was arrested and then later released on bail in London after allegedly assaulting his mother and sister. The actor and his representatives denied the assault ever took place and the charges were later dropped.

McConaughey got his first ever nomination for Dallas Buyers Club. He was everyone’s favorite to win the Oscar, which he did. However, the ladies’ charmer has also brushed in with the law. Back in 1999, he was arrested for possession of marijuana. The drug charge was not the only one, he was also in violation of noise ordinance. They dropped the drug charges eventually. Still, McConaughey pleaded guilty to violating noise ordinance and got a $50 fine.

Why do Oscar Nominees Brush with the Law?

Glamorous life almost every Oscar nominee and winner lead usually gives easy access to things ordinary people can reach. It’s way easier for celebrities to lay their hands on alcohol and drugs. Some of them don’t even consider using those substances a crime.

However, their celebrity status usually helps them get off easy in most cases. But then again :there’s the famous Roman Polanski case. Now that involves even heads of state on top of a huge number of celebrity figures.

In any case, let’s wish all the nominees good luck, and hope they won’t be partying too much in case they win. Luckily, they won’t be taking cars home after the ceremony, but limos. So, at least that evening will be DUI charges free for them.

Learn history and trivia about entertainment betting with a particular focus on the Academy Awards.

Oscar winner Gig Young, who won in 1970 for the film “They Shoot Horses, Don’t They?” Killed shot and killed his wife, and then himself in 1978.