23-year-old Daniel Colman Wins The Big One for One Drop and $15.3 Million 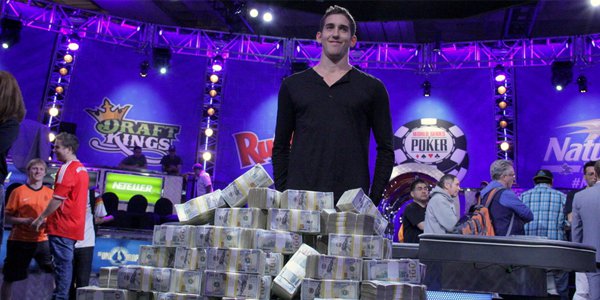 The Big One For One Drop, the biggest live poker tournament, which ran for the second time this year, is over. And the winner is the 23-year-old Daniel Colman, taking home his first WSOP bracelet, the honors, and a huge check for $15.3 million.

The young American had around $350,000 live tournament winnings a couple of months ago, but with this win under American gambling laws, his tally is a bit larger now, $15 million larger. The poker pro from Massachusetts is currently sixth on the all-time poker money winners’ list with $17,988,859 winnings.

The Big One For One Drop

• The huge poker tournament was held under American gambling laws

• First place had a whopping $15.3 million prize on it

The event itself has been held for the second time only, it was created to help a charity, which brings water to those who need it the most. The tournament was thought of and introduced by Guy Laliberte, creator of Cirque du Soleil.

This year it was a part of the WSOP program and has attracted 42 participants, each chipping in a hefty $1 million to participate. The first prize was $15,306,668, which is the second largest payout in the history of tournament poker. While most players brought in their own money for buy-in, a couple of places could be won through qualifiers, including satellites at online poker sites in the USA.

Daniel Colman has had a great run in the last eight weeks, scoring five cash finishes including a nice $2.1 million in the European Poker Tour Grand Final €100,000 super high roller event. He played at a variety of European and American poker rooms, racking up cash finishes one after another.

The final day of the Big One For One Drop commenced with Colman being in third spot with 22,625,000 chips. His opponents included some of the biggest names in poker: Tobias Reinkemeier, Tom Hall, Scott Seiver, Christoph Vogelsang, and Daniel Negreanu. Successful businessmen, also keen on poker, including Tom Hall, Cary Katz and Paul Newey were also there.

Tom Hall was eliminated in the first hand of the day, when his pocket 10s fell to Negreanu’s AQ, and this allowed the remaining 8 players to be in the money and intensify the play. It took only 3.5 hours for the final table of 9 to be reduced to 2, and the heads-up between Negreanu and Colman began.

Colman took an early lead against the six-time WSOP gold bracelet winner, and the head-up lasted for 46 hands in total. The final hand saw Colman holding a 5 to 1 advantage in chip count. Colman held KQ against Negreanu’s A4, and it all seemed to go Negreanu’s way after the AJ4 flop, but the turn brought a straight for Colman with a 10, and the full-house never landed for Negreanu with 7 on the river.

After the big win, Daniel Colman declined interview approaches, but Negreanu was keen on talking to the press. He said: “Really he’s a class act, a good kid and I really like the way he plays. He plays a lot different than a lot of the other young kids, because he’s a lot more careful.”

Negreanu is renowned for being kind to the media, always finding time to agree to interviews. However, he defended Colman for not wanting to speak to the press. He said: “He plays poker. That’s his job and he’s here to work, and if press interviews are not something he wants to do, I respect it completely.”

Previous results for the winners

Negreanu picked up a hefty payout of $8,288,001 for his second place, which was the largest score of his tournament career. This win allowed him to overtake Antonio Esfandiari and top the list of all-time money wins with a total of $29,643,419 in tournament earnings.

Colman was not known as an elite live tournament player before 2014, however, he enjoyed decent success in heads-up Sit’n’Gos. Colman was somewhat trained by Olivier Busquet since 2007. It was the year when Colman was successfully reading Busquet’s hands in online play and sharing his reads in chat window. Busquet contacted Colman later and this is how the mentor relationship began.

2012 saw Colman becoming the first hyper-turbo player in online history to collect over $1,000,000 in a single year (9 months actually). Naturally, the latest two wins will put Colman in history books forever. And considering his young age, there’s plenty of cash and awards to be won.

Here’s the list of the money finishes for the Big One for One Drop: