A History of Gambling in America (part5)

News >A History of Gambling in America (part5) 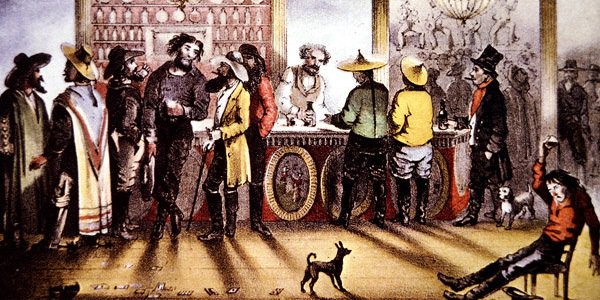 After gold was discovered in 1848 in California, more gamblers headed to the west to reap untold gambling fortune from the prospectors that looked for it. As people moved out west with their families for a better life, professional gamblers aspired to rid the gold dust from the pockets of those who worked to collect it. Towns were set up instantly overnight to accommodate prospectors who searched for gold and silver by day and needed a place to spend money at night.

• King kept writing about the evils of gambling and built up a following
• General Ulysses S. Grant as the head of the Union Army, was an avid gambler
• Civil War soldiers would even engage in racing lice

In no time, towns like Tombstone and Dodge City had a foundation of gambling and prostitution. The revolver would prove to make gambling news. The capital city for gambling in the west was San Francisco. With over 100 gambling venues and casinos, all sorts of people were welcome to play their hand. It wouldn’t be long before the people of San Francisco tried to get rid of gambling. One such citizen was James King.

Gambling was such a heated issue in boomtown San Francisco, that his opponent murdered King in the open street at broad daylight

As editor of the “Daily Evening Bulletin”, James King would campaign against the “evils of gambling.” By printing the names of the San Francisco’s most notorious gamblers the city became highly divided. King, who was educated and spoke several languages, was believed to be one of the richest people in the west. Many saw King’s efforts as an effort to end other people’s livelihoods more than ridding “evil.”

Charles Cora, a dealer, shot and killed a US Marshall. After defense attorney argued, the jury and judge ruled Cora killed the Marshall in self-defense and after a second trial, Cora was sent to prison. Angered but not set back, King kept publishing article furiously against gambling. Another newspaper editor named James Casey, a critic of King’s writings, shot and killed King.

King’s supporters quickly retaliated by storming the jailhouse, dragging Casey and Cora out, and hanging them both. Although gambling would continue to prosper, the moralist made it clear they would go far to prevent gambling from completely taking over. Gamblers were associated with corruption of officials. Soon US gambling laws would emerge outlawing certain games.

Unfortunately these laws were only met with light penalties. In 1860, all banking games were banned in which players would bet against the house. However, Nevada, where gambling was legal until 1910, would serve as a haven for gamblers who left California. Although, Nevada would be the future world capital for gambling, it never reached the level of San Francisco during this time.

The Civil War would create new opportunities to soldiers to gamble

The Civil War would prove to be the main concentration of most people living east of the Mississippi River. America was divided over the slavery as the south threatened and separated from the U.S. and became the Confederate State of America. By then the river boat system had ended because trains were seen as more efficient methods of delivering cargo.

The north had a large advantage over the south because they had most of the factories that could produce munitions for the war. President Abraham Lincoln appointed replayed the over cautious General McClellan for Ulysses S. Grant as the head of the Union Army. Grant, an avid gambler, would prove to be formidable at taking chances and misleading the Confederate Army led by Robert E. Lee.

Unlike Lee, Grant was well aware of the large amount of gambling that took place among both armies. Although soldiers on both sides would read newspapers and the bible, gambling dominated. Sometimes Union and Confederate soldiers, who were in proximity to each other, would meet at a neutral zone, and have card games after dark. Due to a lack of supplies, Confederate soldiers often got their decks of cards from Union soldiers killed or captured.

Union soldier had decks available to them in the North. Soldiers that used those decks claimed it was their “duty” to gamble. Confederate soldiers were also known to participate in horse racing, cockfighting, blackjack, faro and keno. Unknown in US gambling news, there were even accounts of soldier racing lice which proved popular in some circles. Two owners would put their lice on a tin plate and spectators would bet on the runners.