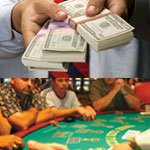 The legendary East Coast gambling hub of Atlantic City took a major hit in 2013, with the New Jersey Division of Gaming Enforcement reporting land-based casino revenue of $2.86 billion in 2013. This figure is down from over $3 billion in 2012.

Famous establishments like the Trump Plaza and Bally’s Atlantic City reported declining revenues over the previous year, with Trump’s falling by 28 percent. Caesar’s Atlantic City took a relatively large share at $336 million, which was still down 6.2 percent from 2012. The bankruptcy of the Atlantic Club Casino and Hotel made gambling news for all the wrong reasons.

It appears that recent legislative changes have put the “Las Vegas of the East” into a downward spiral. Online casinos in America were introduced to New Jersey in 2013, and many gamblers are now choosing to wager their cash online rather than trek to the seaside resort city.

The two dominant players in the emerging online casino game, The Borgata and Caesar’s Interactive, have both online and land-based casinos. It is not certain whether the foray into online means more overall revenue, or simply shifting stakes from the casinos to personal computers.

Keith Smith of the Borgata expressed optimism that the company’s overall pie will grow, however. He reported that among users of the company’s online casino, only 40 percent had visited the land-based casino during the past year, and that the two markets are “complimentary…not competitive.”