Corrupting the outcome of a sporting event is no longer legal 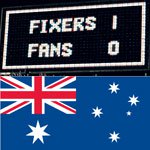 Match-fixing has become a crime. This novel regulation has been approved by the Capital Territory of Canberra, making any activity to fix a sporting event or to use insider info in betting, a criminal offense.

Australian gambling laws give much autonomy to the individual states, and this new rule brings the Canberra Territory in line with neighboring states.

The so called Criminal Code (Cheating at Gambling) Amendment Bill 2013 now bans corrupting the results of a sporting event with the aim of receiving a gain from such activity. It also disallows betting on events if the person is aware that the outcome has been fixed.

The bill comes in the wake of complaints by sports clubs that Bet365, operating internet betting in Australia, offered the possibility to wager on amateur matches.

Although Bet365 has stopped the practice, another company, Sportsbet continues to do so, even through their mobile betting platform. Experts have been warning that such practice exposes the teams to a risk of corruption, which they are ill-equipped to handle.

“Risks to integrity in our sport and racing sectors from organized crime and gambling cheats are a major concern to the Australian Capital Territory government,” according to local Attorney General, Simon Corbell.

He added that “these new offenses are important because of the growth of sports betting as a major industry in Australia.”

“Canberra’s elite teams have recently re-affirmed with me their commitment to maintaining integrity in sport. They have in place existing mechanisms to mitigate potential integrity breaches as well as processes to address these should they arise. There is no doubt sports betting is growing with gambling on sports increasingly prevalent at all levels of our sporting system,” said Barr.