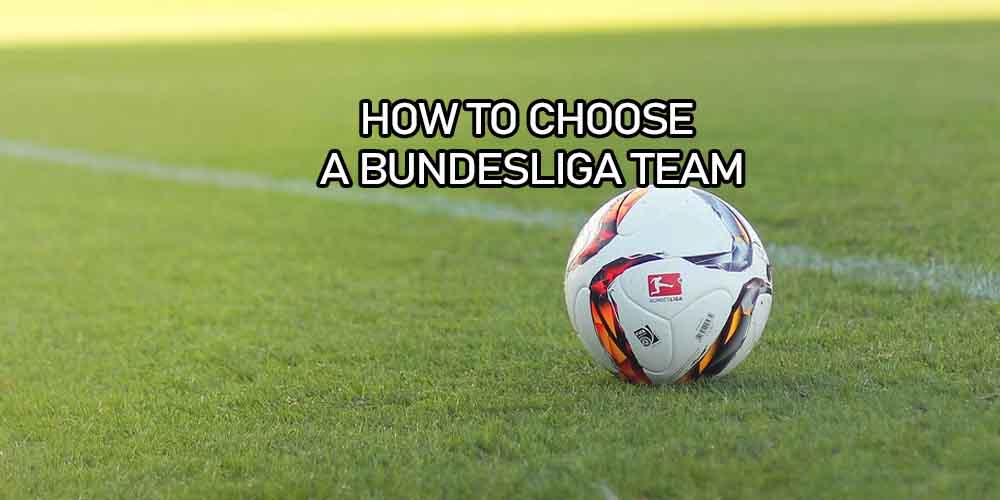 Bundesliga is back in action with fist games kicking off on May 16. If you are a European football enthusiast but did not support the German top flight before this is the best time to change your mind. But, if you cannot decide on the favorite, here is how to choose a Bundesliga team to support.

Bundesliga 2020 season is restarting on May 16, with most clubs having nine matches left to play. According to online sportsbook news in Germany, few things will be different than usual. Games will resume with empty stands, there will be no pregame rituals, and each team will enter separately.

If you did not follow the Geman football before but you tend to be a prospective fan, you are most definitely reading the right article. We are answering a simple question here: How to choose a Bundesliga team to support? You should probably think of title champions and contenders, clubs with a rich history, and the ones who can make upsets.

However, if you are already a Bundesliga fan, you are certainly rejoicing now. But, do not miss placing a bet on the upcoming fixtures and potential winners. Just check out our review about Bet365 Sportsbook for the best odds.

The Bavarians are currently sitting on top with four points ahead of Borussia Dortmund. They have stumbled for a while this season but resurged under new boss Hansi Flick. Bayern would be the best choice if you prefer a team best-known in the league from a worldwide perspective. Besides, if you look for a team consistently at the top of the table then Bayern with seven consecutive titles is a must to choose.

However, if you do not like the leagues persistently dominated with one-horse race, then maybe the top rivals Borussia Dortmund are worth supporting. However, Bayern will be taking a trip to Union Berlin which will make a huge impact at both ends of the table. At Bet365 Sportsbook, Bayern are the favorites with 1.20 odds to win the match and outrightly win the league.

BVB have won eight titles, with the most recent one coming in 2012. They are among the few who can end Bayern’s long run with 6.50 odds. BVB might be flaky but they have the brightest young attacking talents in the world. Erling Haaland and Jadon Sancho are among those great strikers.

Yet you should keep in mind that what makes BVB so special is their fanbase that can generate a boisterous atmosphere. Unfortunately, all games will be temporarily played behind closed doors, which means talent on the pitch is all that we have.

A team with arguably the best striker in the league are RB Leipzig. Timo Werner is their man on the frontline, led by the young talented coach Julian Nagelsmann. Leipzig enjoy a stong showing domestically and in the Champions League. If you like villains, Leipzig will be a great choice as they are most disliked among rival fans.

However, Leipzig’s rapid rise is somehow risky because they only spent four seasons in Bundesliga. Besides, if you do not like teams backed by big corporations then Leipzig will be the worst choice, as they have been created by the Austrian energy drink manufacturer Red Bull.

Another club backed by a big pharmaceutical company is Bayer Leverkusen. The club has been always there among the top four of the table. And the team’s next game will be relatively easy against Werder Bremen. Leverkusen value 1.66 to win that match. If you pick Leverkusen you will stay in contention for sure.

However, Leverkusen never won Bundesliga. They have been even labeled ‘Neverkusen’ because they are always the bridesmaid when it comes to titles. That might drive you crazy to keep up with the race but never hope for a title.

Clubs with a rich history

Eintracht Frankfurt have the best jerseys in Bundesliga

Eintracht are a grand old team with a large fanbase. They have had lots of impressive history in the top flight. And, they regularly feature in the top half of Bundesliga. As a supporter of Eintracht, you should be very proud of going back in time. Besides, no team looks cooler than Eintracht with the best jerseys in Bundesliga. That must be an added value!

According to online sportsbooks in Germany, Eintracht is for sure very exciting for the future. Their odds are huge 4501.00 to win the league. But, what if the success and titles never come?

Fortuna Dusseldorf is one of the country’s oldest clubs established back in 1895. The club won the top-flight title in 1933. As for the present days, Fortuna Dusseldorf is usually involved in some of the most entertaining matches and we can agree that it is a cool team name.

It took Fortuna Dusseldorf a lot of time to get back in the top-flight. However, the team is already in the relegation zone. Thus, you might not want to follow a team to Bundesliga 2.

Clubs that can make upsets

Paderborn on their way to be relegated

If you have been following the Premier League and noticed Norwich City, then Paderborn might be on your checklist. Paderborn just earned a promotion to the Bundesliga last season. However, they are currently 10 points from safety. So, you shall expect the team to score some big upsets in order to survive.

Similar to Fortuna Dusseldorf, Paderborn is on their way to be relegated, so you might miss the next season of Bundesliga. And of course, it will not be the first time as they have spent a lot of time moving up and down from the first to the third tiers.

Freiburg can make some big surprises

Freiburg is another team that can easily surprise the fans. This season they drew against Dortmund and Leverkusen. Besides, they won against Leipzig and Eintracht Frankfurt. But, they have also lost against many teams in the lower half of the table.

Freiburg is the massive underdogs in almost every game and they usually try to punch above their weight. Thus, if you do not like that then feel free to choose any other team.