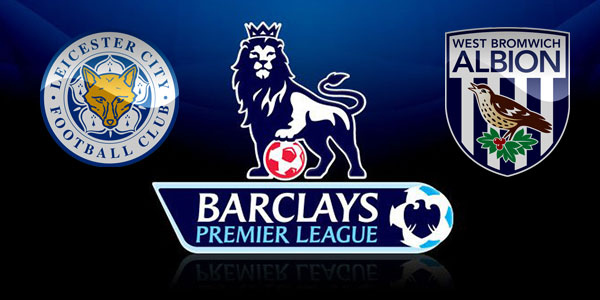 Tuesday’s Premier League matches will provide drama at the top and bottom of the table: read on for the best odds you can find online!

This year, Leicester are the biggest online gambling news in the UK. They began the season as 5000/1 outsiders and they are now topping the league! Until the 89th minute of their match against Norwich on Saturday, it looked like their dream was finally beginning to stall. Thanks to Ulloa’s dramatic winner the dream lives on and they will face West Brom still full of confidence. Bet on Ulloa to do the job for them again: he’s 6.50 (11/2) to be first goalscorer on Bet365 Sportsbook.

However, punters should be worried by Leicester leaving it so late to score against struggling Norwich. West Brom may have beaten Crystal Palace but, after conceding two goals, nil-nil specialist Tony Pulis will be keen to tighten up the defence. This could make for a low-scoring encounter: No Goals Scored is 8.50 (15/2) over on Bet365’s online sportsbook.

Will Tuesday’s Premier League matches be crucial in the battle against the drop?

Norwich may be deflated after their exertions against Leicester came to nothing. However, if they can hold out against the league leaders they’ll hope they can do better against 11th place Chelsea! The London club will be concentrating on Europe with their second-leg against PSG only a week away, and they struggled to an unconvincing win against Southampton at the weekend. Go for the underdog: Norwich to win is 5.75 (19/4).

Sunderland will also fancy an upset. They are five places behind Crystal Palace but unlike the South London outfit, at least they have won a league match this year.Sunderland to win is 2.60 (8/5) at Bet365 Sportsbook.

Aston Villa, though, don’t seem to have any hope of escaping relegation. They’re a team “that finds in difficult to score goals”, as their manager Remi Garde admitted after their loss to Stoke at the weekend. Their opponents on Tuesday are Everton, who certainly don’t lack for goals. They have bags of scoring potential and this could prove to be a rout: try Barkley to score two or more goals, priced at 15.00 (14/1) on Bet365.

Max Gradel will hope to excell for Bournemouth versus Southampton(Photo: ITV)

Two teams already on the beach in the South Coast Derby?

The final game sees features two Southern rivals having decent seasons: Southampton are pushing for Europe, while Bournemouth have impressed in their first year after promotion. A blessing for Bournemouth is the return of Max Gradel after his six month layoff thanks to a knee ligament injury. If you bet on sports in the EU, you’ll know he excelled in France last year, and now he’s back will be trying to make up for lost time.