Must We Bet On The Americans To Win The President’s Cup?

News >Must We Bet On The Americans To Win The President’s Cup? 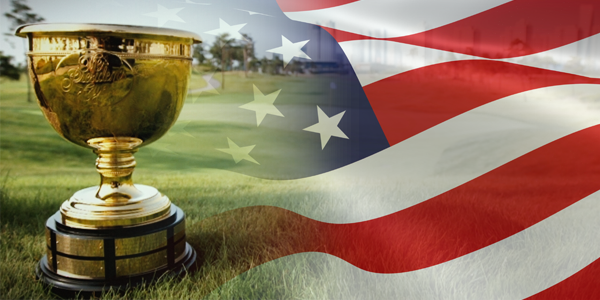 It only takes a quick glance at the President’s Cup odds to know this is a bit of a one sided affair however much Nick Price, Captain of the International side, might talk up his team’s chances the bookies like Bet365 only giving the visitors a scant 7/2 to take a victory. However anything could happen over the four days of this superb competition so should you take advantage of US gambling laws and chance a wager on the underdogs or bet on the Americans to win the President’s Cup again?

Again if you’re European you might not have heard of the venue, and indeed may find it surprising that Liberty National Golf Club is actually in New Jersey, a state for which popular culture has done no favors. Steve Stricker, Captain of the US team, will lead his side out knowing the bookies like Bet365 give his side a tidy 2/7 to take victory and that most of the money will be bet on the Americans to win the President’s Cup not that you have to wager on the outcome, there’s plenty of side bets to be had.

Is A Bet On The Americans To Win The President’s Cup A Wasted Opportunity?

At bookies like Bet365 you can wager on all sorts of stats, the correct scores being an eternal favorite there, but there’s also plenty of scope to place a bet on the top player on each team if you’re not content to just bet on the Americans to win the President’s Cup. Jason Day and Hideki Matsuyama both get 9/2 on the International side, with Jordan Spieth and Dustin Johnson getting the same for the US team. Naturally both teams brim with talent so that can be a tricky call, especially if the weather kicks up.

The Top Debutant book, run by Bet365 et al, is a little more interesting with Justin Thomas at 3/1 only marginally ahead of Brooks Koepka on 4/1 and Daniel Berger on 15/2. It can be a big ask to do well in this tournament, but they’ll be trying their damnest knowing a lot of people who like to bet on sports in the US will have not just bet on the Americans to win the President’s Cup once again but branched out into some of the other wagers available online. Some of them quite specific to this competition.

Will any of the players gain a maximum of five points? It’s a tough one but it could happen and Jordan Spieth and Dustin Johnson both share a 14/1 shot at bookies like Bet365, with Patrick Reed and Justin Thomas on 18/1 and the always surprising Rickie Fowler gets a relatively tempting 20/1 to pull off this feat of good golfing. Whether you bet on the Americans to win the President’s Cup or not the one thing you won’t be able to bet on is whether or not big fan Donald Trump turns up to watch proceedings.

Obviously there will be those in the US gambling news of the woe in Puerto Rico and the biggest and most dangerous nuclear stand off sincethe Cuban Missile Crisis might keep their Commander In Chief too busy to attend, however let’s remember Trump has had enough time to talk at the NFL about the on going protests against racist police violence and killings, so who knows. He might show up in Jersey, after all the orange little narcissistic man-child will point out his name in on the trophy, right?