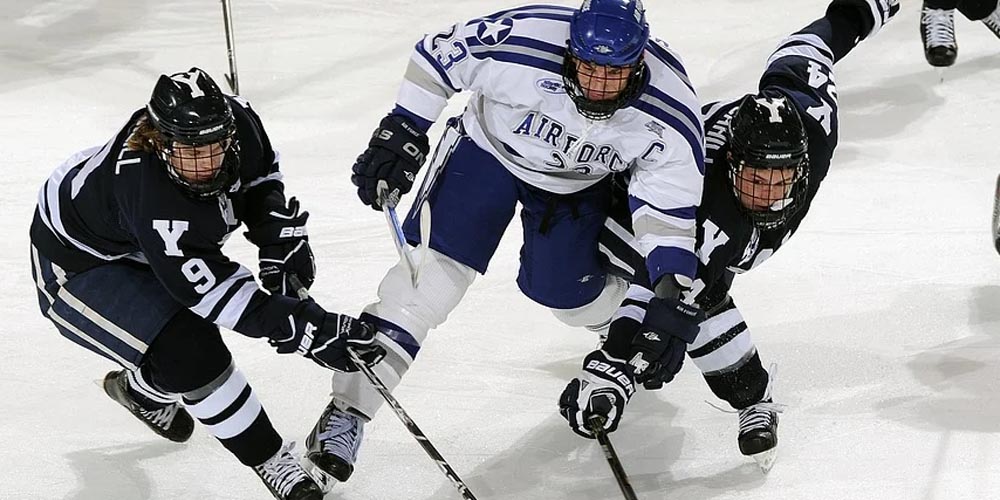 The 2020–21 Champions Hockey League will be the seventh season of the competition since its formation in 2014. Swedish club Frölunda currently have by far the best record in the competition. They have won four of six CHL tournaments to date – 2016, 2017, 2019 and 2020. Bet on Frölunda Indians to win Champions Hockey League 2020/2021 looks at what it is that makes the team so successful, and why they are such a solid bet to repeat their success again this year.

The tournament was launched in the 2014–15 season, with 44 clubs from 12 European countries participating. In the final that year, Luleå HF defeated Frölunda Indians 4-2. This year, however, Frölunda they will be back again, and looking for their fifth title.

The opening games of the 2020-2021 season have been pushed back to October 6 and 7, with the return legs a week later on October 13 and 14. As a result, there will be no group stage, and the competition will be purely a knock-out contest. Starting with a round-of-32, it will be a two-leg, home-and-away, aggregate score series up to the semi-finals. The tournament culminates on February 9, 2021 with the one-game final.

A total of 61 games will take place over the course of nine match days during the campaign. The 32 teams competing now know their opponents for the Round-of-32, and potential pathway through to the final itself following the draw. In the first round draw, Frölunda have drawn Neman Grodno. The Belarusian team should prove no real problem for the favourites, who should see them off with relative ease. Which means you’re already one step closer to a winning bet on Frölunda Indians to win Champions Hockey League 2020/2021 at various online gambling sites in Sweden.

From perpetual underdogs to champions of Europe

The Champions Hockey League includes the best teams from all over Europe. The evolution to its current form, however, began in Scandinavia. In 2006, four Swedish clubs – Djurgården Stockholm, Frölunda Indians, Färjestad Karlstad and Linköping HC – and four Finnish clubs – IFK Helsinki, Kärpät Oulu, Tappara Tampere and TPS Turku – established the Nordic Trophy. In its inaugural season, the eight teams faced off in a seven-game round-robin tournament. In the final, Färjestad came out on top after defeating Kärpät 5-1. All eight of those original clubs are now shareholders of the CHL.

Frölunda Indians (or Frölunda HC) are based in Gothenburg, Sweden. They play in the Swedish Hockey League (SHL) and are now one of the biggest names in European ice hockey – but this was not always the case. The club reached a historic low in 1984 when it was relegated from Sweden’s top league, only returning five seasons later in 1989. At times, the situation was so bad the club’s survival was in doubt. And yet, this year, they will be gunning for their fifth championship in seven years.

At the climax of the 2019/20 edition of CHL, the Swedes lifted the trophy for the fourth time thanks to a 3-1 win against Mountfield HK. The Czechs were ahead after 6 minutes and 53 seconds courtesy of Petr Koukal, but during the last 3 and a half minutes of the first period, Simon Hjalmarsson, Max Friberg and Johan Sundström slotted the 3-1 final score for the Indians. Frölunda have truly gone from perennial underdogs to Kings of Europe. And you could do a lot worse than bet on Frölunda Indians to win Champions Hockey League 2020/2021, as this impressive form looks set to continue.

Team’s youth programme has been key to success

This dominance is due to something the club got very right back in the 1980s – they developed a youth program. After many up-and-down decades of relegation and promotion, it helped secure their spot in the country’s top league in 1995. And since then, they haven’t looked back. They can now boast four Swedish Championship and four Champions Hockey League tournament trophies.

To do this the club created Campus Frölunda in 2009 to host all of the various teams. Here, coaches meet weekly to share information and communicate among themselves. Those from the A-team and those working in the youth academy often swap roles, allowing them to utilize the same playbook with all of their players. Success on the ice was also helped by the hiring of head coach Roger Rönnberg in 2013. He has previously won a silver and two bronze medals with the national men’s team, and led the U20 team to gold and silver at the World Championships.

And the immediate goal isn’t always to win, although it’s always part of the plan. It’s also to find talented new players and make them fall in love with the game. This way, the development aspect becomes a much easier task. It takes years to mould players the right way, and it doesn’t always work out. Players can be ranked very high ahead of the NHL Draft, for example, but never play an NHL game. The Indians, however, seem to have become the gold standard – and are only getting better. So alongside a bet on Frölunda Indians to win Champions Hockey League 2020/2021, why not check out the odds on this year’s Swedish top tier competition here Bet on Ice Hockey in Sweden: SHL 2020/21.

The programme has paid off enormously for Frölunda. So well in fact that many players drafted to the NHL come from the team’s junior program, the Frölunda HC J20 club. The club plays in the SuperElit, and has won 10 Anton Cups as league champions, more than any other club in Sweden.

The NHL has also drafted no fewer than 82 players after they have played for Frölunda the previous season. And the organization acts as a finishing school for both Swedish and neighbouring countries’ players who have been selected into the NHL. Clearly, Frölunda’s recipe for success is working and NHL teams have taken notice. With this kind of set-up in place, and on the back of last season, a bet on Frölunda Indians to win Champions Hockey League 2020/2021 seems as likely to pay out as ever.

Over the years, Frölunda talent has become a fixture on numerous NHL teams. They have produced many big names, with players getting higher and higher up the NHL draft. In 2018, this culminated in the Buffalo Sabres drafting Frölunda alumni Rasmus Dahlin first overall. Named to the All-Rookie Team in his first season, he looks to be leading the way for the next generation of defensemen entering the league. And by the end of his career, Dahlin could well be the best player to ever come out of Frölunda. He is, however, just the latest in a long line of players that sets Frölunda apart as a talent hotspot.

One of the best players to come out of Frölunda to date is Daniel Alfredsson, a future Hall-of-Famer for sure. A late-round steal in 1994, drafted 133rd overall, he went on to win the Calder Memorial Trophy as rookie of the year in 1995-96. The long-time Senators’ captain finished his career second all-time in games played for the club. His 426 goals, 682 assists and 1,108 points are also Senators records. And the club retired his No.11 shirt on Dec.29, 2016, making him the first modern-era player in Senators history to receive the honour.

Another player destined for the Hockey Hall-of-Fame is New York Rangers’ goalie Henrik Lundqvist. Drafted 205th overall in 2000, the Blueshirt’s netminder has been one of the best in the league ever since his rookie season. He won the Vezina Trophy for the league’s best goaltender in 2011/12, and has twice been named to All-Star Teams. All-time, he’s in the top 10 for goaltender games played and wins, and top 20 for shutouts.

Erik Karlsson was taken 15th overall in 2008. And like Alfredsson, he went on to become the face and captain of the Senators for nearly a decade before being traded to the San Jose Sharks. He’s won two Norris Trophies for league’s best defender, and been named to the All-Star Team four times. With much of his career ahead of him, what else he will achieve remains to be seen. Already though, he’s a testament to Frölunda’s depth of talent, one which makes a bet on Frölunda Indians to win Champions Hockey League 2020/2021 a potentially lucrative wager. With many online sportsbooks in Sweden offering Tournament Winner odds of 7.0 on Frölunda, the outright market alone could net you a seven-fold return on your money.

Frölunda’s dominance over the course of the last five years is more than a little impressive, and shows no signs of disappearing any time soon. The Indians have reached the final four times during this period, more times than any other club has reached the quarter-finals. And it isn’t a Swedish thing either. Only three other SHL clubs have made it as far as the semis. And the only other SHL club to win the competition, Luleå HF, hasn’t even qualified for the past two years.

Such is Frölunda’s dominance that they now belong to an exclusive club – one of only four hockey clubs with three or more European titles. The all-time leader, CSKA Moscow, is in a class of their own. Between 1969 and 1990 they won 20, including an unbelievable 13 in a row. Talk about a dynasty.

Two others have three, with both winning them in a relatively short period of time. Czech team Kometa, or ZKL Brno as it was previously, won the first three IIHF European Cups in 1966, 1967 and 1968. Russian side Metallurg Magnitogorsk won the European Hockey League in 1999 and 2000, and the European Champions Cup in 2008.

For the time being then, CSKA’s total is a little out of reach, but with Frölunda having won four CHL championships they move into second place in all-time European championship titles. Many would argue that they have confirmed themselves as currently the best team in Europe. And based on the standard the club has set over the CHL’s history to date, it seems reasonable to assume they too could go on to become a hockey dynasty, something the club will surely be looking to make happen – another reason to bet on Frölunda Indians to win Champions Hockey League 2020/2021.

So a bet on Frölunda Indians to win Champions Hockey League 2020/2021 is looking good for a number of reasons. They have strength and depth in players, including young talents such as Samuel Fagemo, another NHL prospect. If you look at the statistics, Frölunda are strong both in powerplay and shorthanded situations, almost three out of ten powerplays resulting in a goal. They have speed, and when other teams have problems keeping up, it means penalties. And of course, they have the main attraction – Ryan Lasch, MVP of the 2019/2020 Champions Hockey League.

Then there’s experience of the big game. A team who has reached the CHL final in four of the last five seasons has a huge mental advantage in any game. And there’s the atmosphere at those games. The 12,044 seater Scandinavium will be an experience fans won’t forget. Even if teams bring a couple of thousand fans with them, they’ll still lose the noise battle in the stands. Having that ‘sixth player’ is something that can’t be under-estimated for Frölunda.

You can read about the other tournament hopefuls here Bet on 2021 Top Early Contenders. At the same time, you can also check out the odds on offer at 888sport, one of the best online sites for ice hockey betting. 888sport currently have Färjestad 7.25 as favourites, with Frölunda Indians 8.0 and Lulea Hockey 8.0 following closely behind. And at these odds, even an outright bet on Frölunda could produce some very nice winnings. Anyways, you’re free to pay your money and take your choice. But whichever way you decide, be sure to look out for the wide range of in-play betting opportunities and live streaming when the action finally gets underway this October.