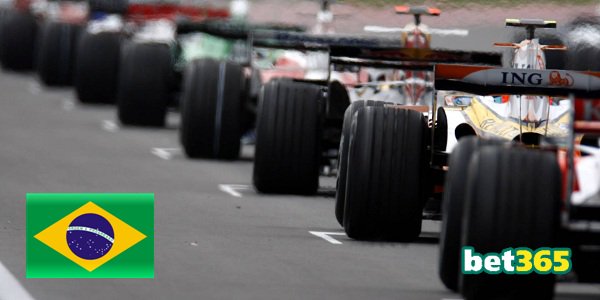 There are some great opportunities in the Brazilian GP odds, so make sure, you bet on this weekend’s race.

Formula 1 arrived in Sao Paulo, Brazil, where the penultimate race of the 2015 Formula One season will be held at the Autódromo José Carlos Pace, also called as the Interlagos (‘between lakes’) circuit. The track is a short but old-school, wild and exciting venue. There are very fast and very slow sectors and also a lot of changes in elevation.

It is almost 800 metres (2600 feet) above sea level, and since Mexico showed that current V6 turbo engines are not affected by the thickness of the air that much as their predecessors, F1 pundits, online sportsbooks in Brazil and experts of successful sports betting strategies expect that Juan Pablo Montoya’s lap record from 2004 (1:11.473) could be broken this time. Now have a look at the Brazilian GP odds with the courtesy of Bet365 Sportsbook!

Expect Nico Rosberg to get the pole!

Lewis Hamilton, who already secured his title-defence, dominated Saturdays in the first two-thirds of the 2015 F1 season, winning 11 out of 12 qualifications. However, since the Japanese Grand Prix, his teammate, Nico Rosberg won four qualifications in a row. He also claimed the fastest lap in the last two races in Texas and Mexico City and he has all the chances to be the fastest man on the grid in the third race in the Americas in a row.

Though Hamilton is the favourite to win having 1.61 (8/13) Brazilian GP odds, this week was far from smooth sailing for him. He had the fever which prevented him to arrive in Brazil in scheduled time and he also had a minor road accident in Monaco on Monday. Alright, these guys usually perform the better in the weirdest situations and Hamilton is also motivated to finally win the home race of his idol, Ayrton Senna.

However, his teammate, Nico Rosberg won the last race in Mexico and also succeeded here in Brazil a year ago. He is also motivated to finish this season on a high and annoy Hamilton where he can, so, looking at the internet betting odds Bet365 Sportsbook offers for his victory, Rosberg is really worth to wager on this weekend.