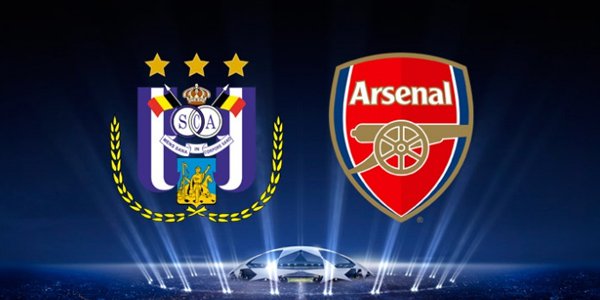 Arsenal prepare to qualify for the Champions League knockouts, they need a win tonight to do so.

Sixteen of the best European football clubs are going at each other in tonight’s Champions League matches. Interestingly enough these will be sort of return-legs of the fixtures played two weeks ago, as it’s the turning point of the group competition. Naturally, almost every self-respecting online sportsbook in the United Kingdom will be offering great odds on all matches.

While there’s plenty to choose from in tonight’s menu, not to mention another eight matches scheduled for tomorrow, we’d like to focus our attention on the Arsenal v Anderlecht fixture, as it may provide some of the best value bets for punters wagering under British gambling laws.

Trivia about the upcoming game

• Arsenal’s win will guarantee their progression to the knockouts

• On the other hand, should Anderlecht lose – they will have no chance of qualifying

Ever since they’ve won 2-1 in Belgium two weeks ago, Arsenal have been going from strength to strength, and there seems to be very little chance for the visitors at the Emirates. However, that’s where smart punters can take advantage of some long odds offered for the tie or Anderlecht’s success.

The teams have never met before in the framework of Champions League, but Arsenal are no strangers to playing Belgian teams having beaten Standard four times and losing out to Winterslag twice, however that was back in 1981.

The Gunners are now in second place with 6 points, 3 points down from perfect Borussia Dortmund. A win tonight will certainly move them closer to the Champions League knockout stages, leaving Anderlecht with no hopes of qualifying, considering they only have a single point now.

It’s now or never type of situation for the Belgians, and that’s where the unexpected can happen in Champions League. Those who bet on sports in the UK know that the team, which has nothing to lose can fight like an injured tiger, making a little profit for smart punters.

During the last match, both of Arsenal’s goals were scored in the last few minutes, overturning the 1-goal deficit. Yes, it was a hard-fought game and yet another reason to suspect the fixture in London will be anything, but a walk in the park.

Moreover, Anderlecht have managed to score very respectful draw with Galatasaray playing in Turkey, but then went on to lose 0-3 to Borussia at home, and then 1-2 to the Gunners also in Brussels. The last match may be considered quite unlucky for Besnik Hasi’s men, considering they were leading all the way until 89th minute, but the loss seem to have had very negative effect on the team.

Anderlecht went on to lose in domestic league for the first time in whopping 17 fixtures. While the win in Brussels served as a boost for Arsene Wenger’s team, who went on to speed past Sunderland and Burnley in their last two games, conceding 0 goals and scoring 5.

As for the odds on the upcoming match, most online bookies seem to agree with each other, favoring Arsenal with a line of 1.33, while giving Anderlecht almost impossible odds of 10.50 to score their first away win in Champions League since 2005. The draw here is also highly unlikely and will pay at 5.50 from Bet365, which might bring great rewards if punters are brave enough.

To add to their troubles, Anderlecht will be playing without their key men Matias Suarez and Steven Defour. However, the Belgian team does have much better away record this season than they have for home turf games.

As for Arsenal, Alexis Sanchez has scored 10 times in his last 12 games, and there should be no reason to expect him to miss this time around. In fact the odds on him becoming the first one to find the back of the net are a cool 4.50 at Bet365, a bit longer that Danny Welbeck’s 4.33, but quite rewarding nonetheless.

Correct score odds are what should interest punters the most in this game. Predicting the outcome will be tough, but the rewards are great: 8.00 is paid for 1-0 Arsenal’s success, while 2-1 and 3-0 pay at 8.50. Interestingly enough, 4-0 is also on the cards with 13.00 odds attached to this scoreline. Should Anderlecht surprise everyone with a 1-0 win, the bookies will pay at whopping 26.00, something to note for those die-hard Belgian fans.