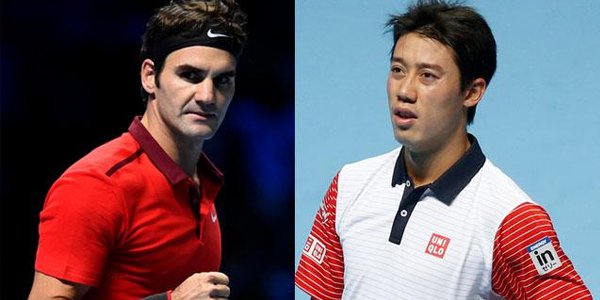 Follow and bet on the great battle between Roger Federer and Kei Nishikori on Day 3 of the ATP World Tour Finals.

This year’s competition is extra special, considering that Roger Federer has been gaining form all year and will try and win his record-setting 7th title on Sunday, while the current world number 1, Novak Djokovic is the favorite of those who bet on sports in the UK to win his 3rd crown in a row.

Besides the prestigious trophy which goes for the tournament and a rather sizeable prizepool, there’s a private battle going on. Djokovic is leading Federer in terms of points, but the Swiss pro still has a chance to grab the year-end number one spot from the Serbian.

In order to do that, Federer needs all 1500 points given to the undefeated champion in London, and hope that Djokovic wins not more than two games. Considering the Novak only gave 2 games to Cilic yesterday, Federer’s odds on snatching the number 1 spot grow dimmer by the day.

• Online sportsbooks in the UK favor Federer, but Nishikori is in with a great chance as well

• Outright betting odds may not be attractive, but other markets have good value

Coming in for yesterday’s match with Wawrinka, Berdych was the favorite at all sportsbooks operating under British gambling laws. But the underdog Stanislas managed to shock Tomas early on in the match and never allowed the Czech to recover, beating him 6-1, 6-1, and proving everyone wrong.

In the other group, Kei Nishikori managed to beat the crowd favorite Andy Murray, who failed to put up a real fight, and will now have to look forward to this evening’s match against Milos Raonic in order to keep his qualifying hopes alive.

Also back on Sunday, Roger Federer revealed quite decent form against Milos Ronic, beating him 6-1, 7-6, including a 7-0 on the tie break in the last set. Roger definitely needs a better performance against Nishikori, who seems to be on fire, having qualified for the prestigious event as the first Asian man.

The two players have met only on four occasions before today, and the score is tied at 2-2, Nishikori beating Federer in Madrid last year and in Miami this year, while Federer taking the upper hand in their last meeting in Halle this summer.

Considering that both players are on rather great form, the match later on today is expected to be nothing close to a walk in the park like yesterday’s fixtures. Both tennis pros should have already adapted to the conditions at the O2 having played one match each, so expect a close battle with great betting opportunities.

This season, Nishikori’s stats are 5-3 against top-five opponents, not including a miss with Rafael Nadal in Madrid, when Nishikori was dominating the game, but had to withdraw with an injury. As for Roger Federer, his record this season against the top-five players is pretty similar: 5-4.

Nishikori has another advantage, he’s got an impeccable record this year when it comes to deciding sets. The Japanese player has won 16 out of 17 three set matches this season, and interestingly enough there’s a highly attractive line of 7.00 from Bet365 for his tonight’s 2-1 win, worthy of a wager for sure.

No surprise that the majority of bookies are favoring the former champion to win today. Bet365 values Federer’s success with a line of 1.44, while Kei Nishikori gets 2.75 to produce a surprise and beat the Swiss pro. But the outright odds are not really valuable for this match, so let’s take a look at the other markets.

As for Roger, his success in the first and then in the match pays at 1.61 at Bet365, not something we should consider. But in case he wins the first set, but fails to win the match – they payout is much more attractive: a whopping line of 9.50.