Celebrity Betting: Bet on Kim Kardashian to Become the President of USA

Current reigning queen of contour-sticks and social media, the ultimate and indisputable force of the 2010’s, Kim Kardashian awaits your bet on her presidency in 2020. If you are into celebrity betting then you should live with this opportunity. 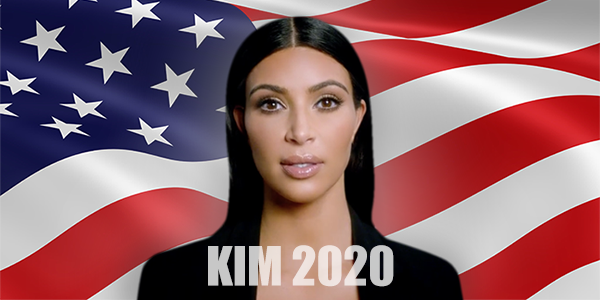 In June, 2018, Kim Kardashian visited President Donald Trump to lobby for the release of Alice Marie Johnson, who was imprisoned for cocaine trafficking in 1996. After the visit, Trump commuted Johnson’s sentence. Apparently, this had no effect on Kim’s betting odds. Shortly after, she was asked about the possibility of running for office, to which Kim responded:

“You know, everyone’s been asking me that, and I said in one interview, ‘Never say never.’ And then I was like, ‘Why did I say that?’ I don’t have political aspirations. I really don’t!”

Arguing against the power of the Kim is pointless. Exploring the extents of her influence, however, might be even profitable. Kim Kardashian is a millennial icon and her power is well-demonstrated by an impressive business portfolio. Most recently, she made millions in a matter of minutes with her KKW Beauty line, which fed off Kim’s lasting influence on makeup trends. When it comes to celebrity betting options, Kim Kardashian West’s name appears only in offers for the next presidential elections.

Many seem to overlook the fact that Mrs West has a lot in common with the current President of the United State of America. Most evidently, they are both successful businessman, brought to our attention by reality-TV. If one can do it, so can the other. The question is, whether Kim Kardashian West wants to do it? No, there are no jokes or sarcasm here. All throughout last year’s race, many have been sarcastic about a potential Trump presidency, and look at us now!

In 2012, she dubbed herself a liberal Republican, a social liberal but fiscal conservative. Since then, Kim Kardashian’s political views have evolved. “I decided what I think is best for me instead of what my parents would have voted for,”  she put. Her support of Hillary Clinton in 2016 was much less loud than let’s say Katy Perry’s. Furthermore, Kim Kardashian is known for supporting the Black Lives Matter movement, gay rights, and – thought some might not agree – she considers herself a feminist. As of now, we don’t know more about her political views.

Can you imagine Kim Kardashian as the first female President of the United States? If yes, make sure to place your bet on her. Though her odds might not be the best, keep in mind that Trump’s odds weren’t either.