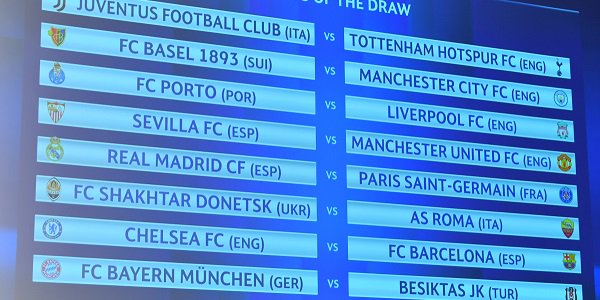 The Champions League Round of 16 drawing took place today. There are some pretty exciting pairings, while other encounters seem to be done already, even before they started…

City and Bayern in the Quarter-Finals already?

Manchester City are among the top candidates to win Champions League 2018. Especially now that they were drawn against Basel in the Champions League Round of 16. Pep’s men are believed to have an easy task beating the Swiss champions, all online sportsbook sites in the UK agree upon that.

Pre-finals in the Champions League Round of 16?

After the ‘boring’ ones, let’s take a look at the most exciting Champions League Round of 16 matches: PSG were drawn against Real Madrid, while Barcelona will face Chelsea in the first eliminatory round of Champions League. Online sportsbook news sites in Spain can only hope for the two Spanish giants to survive, but they are both up for a real challenge.

One of their earlier encounters was in fact extremely memorable…

We can rarely see such exciting battles, so it will be a disaster to see either Real, Barca, PSG or Chelsea to be knocked out as early as in the Champions League Round of 16, bot two of these four teams will be forced to leave. The two surpassing ones will, however, have more power than ever before, after beating such a tough rival.

Four more matches are to be played in the Champions League Round of 16. In these ones, Liverpool will face FC Porto, where the online sportsbook directory expects Klopp’s men to go through. Another English team, Manchester United, will face another Iberian as they seek to knock Sevilla out.

AS Roma will make a trip to the wild East as they hope to beat Shakhtar Donetsk in the beginning of March, and the last of the UK teams will be up for another challenge: Tottenham Hotspur are to beat last season’s runner-up Juventus, which is also a promising European football derby.