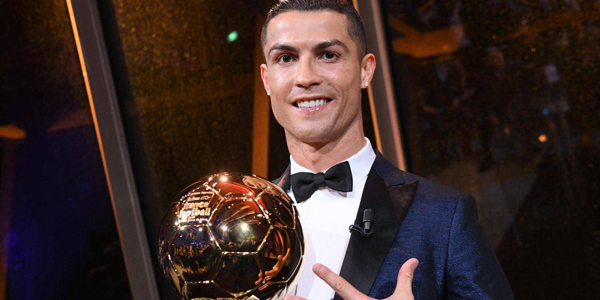 Cristiano Ronaldo has caught up with Lionel Messi’s record of five Ballon d’Ors, after being voted as Europe’s best player for his accomplishments in the previous year. His Argentinian counterpart came in second in the voting standings, while former Barcelona forward Neymar – who now plies his trade for PSG – was voted third best player.

Ronaldo enjoyed a marvelous 2016 during which he not only guided Real Madrid to their 11th Champions League triumph, but more importantly helped Portugal win their first-ever Euro Cup, although not playing for most of the final match due to injury. (Bet on sports in Portugal.) Naturally, he was expected to win the Ballon d’Or that particular year for this superb effort, and he did.
However, once the 2016/17 season began the once lethal forward showed signs of weakness and lack of form for the first time in his career with Real Madrid. Except for his inaugural season with Los Blancos (2009/10) where he scored ‘only’ 33 goals, Ronaldo averaged above 50 goals per campaign until the summer of 2016. For six straight seasons, he did what nobody managed to do, not even his arch-rival Messi.

“He did what nobody managed to do”

But once the previous campaign rolled in, the Portuguese captain found himself struggling in front of goal. To make things worse, his ego took a hit as well. For the first time in a long, long while he was even substituted during a game by Real Madrid boss Zinedine Zidane, which suggested there was a rift between the pair. By all accounts, Ronaldo was no longer the man everyone went to when they needed a goal, as younger players like Marco Asensio and Lucas Vazquez started springing up.

His form has noticeably dropped in the last 18 months (source: The Guardian)

Furthermore, Barcelona were firing on all cylinders during the group stage of the previous Champions League campaign, which made them one of the top favourites to win the competition that season. It has become customary to award the Ballon d’Or to the best player of the club that gets their hands on Europe’s most coveted trophy, which is why Messi was touted yet again to land another Golden Ball – it would have been his sixth. Online betting sites in Spain favoured the Argentine to clinch the Ballon d’Or for 2016.

12 goals in the Champions League

Despite suffering a dip in goalscoring numbers by his own sky-high standards, Ronaldo still managed to bag 42 goals across all competitions last season, 25 of which were scored domestically. His 12 goals in the Champions League helped Real Madrid defend their title against Juventus in the final – a match where Ronaldo found the back of the net twice. Not only that, but Europe’s most successful club finally saw some domestic glory, as they clinched the La Liga crown for the first time in five, long years.

With both of these trophies in his bag and striking the back of the net ‘merely’ 42 times overall, the Madeira native deservedly got what he deserved – his fifth Ballon d’Or. But the question is, will he continue collecting Golden Balls, or if this perhaps his final one? Ronaldo will turn 33 years of age on February 5th, 2018 – right before the World Cup in Russia – and considering that Messi is two years his junior, we’re doubtful whether the Portuguese captain can keep up with his previous records.