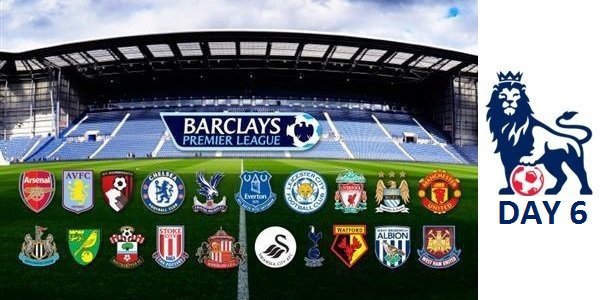 Round 6 of the Premier League is set to get underway, and we sure have a great derby to look forward to: Chelsea v Arsenal.

Last week the Premier League showcased a host of solid games, but it also involved some sides putting on disappointing performances. Manchester City currently occupy the top of the table with 15 points, thanks to 5 out of 5 wins so far. The Chelsea v Arsenal game might prove to be a decisive one for last season’s champions, as they find themselves in 17th position with only 4 points.

• Jose Mourinho remains confident in his managerial abilities
• Manchester City are still favorites to win against West ham, despite injuries
• Everton face squad troubles ahead of a clash with Swansea away

But that is not the only game mobile betting punters can look forward to. Everton will play Swansea away, and fans will be hoping that striker Lukaku can continue causing problems for the opposition, despite not scoring against Chelsea last weekend. On Sunday, Tottenham will take on Crystal Palace at home, so they should have the necessary support behind them to clinch the three points.

When questioned by a reporter if he still had the necessary skills as a manager, the Portuguese immediately responded with, “The point is the question is stupid. I am sorry.” Last year Chelsea swept by opponents with relative ease, but this season they have hit a bad run immediate at the start of the season, recording only 1 win, while the other games ended in 1 draw and 3 losses.

The charismatic manager also stressed, “I promise you I am fine. I am not happy. I am not used to losing so many times but I am adapting to the situation.” Observers and punters that bet on sports in the UK might criticise the statement, and rightfully so. It’s strange how he is “adapting to the situation” when the team keeps on losing to sides that don’t have the same spending power as them.

For the sake of the Blues supporters, the Chelsea v Arsenal encounter should provide the team with plenty motivation. Capturing the three points is essential, but there is an even greater objective at okay here. Winning against a rival team can really boost players and lead them on a successful run afterwards. Bet365 remains somewhat divided on the results of the game. Chelsea have preferential odds 2.37 (11/8), but only just. Arsenal have been assigned 2.87 (15/8), however a draw looks appealing considering the current form of both sides 3.40 (12/5). Have a look at Bet365 Sportsbook review if you want to find out more info on certain offers.

Other games are also worth taking a look at

Manchester City will defend their current unbeaten run against West Ham at the Etihad. Although they boast a fearsome squad, some of their star players are doubtful the clash. Aguero has sustained an injury last weekend when they played against Crystal Palace, due to a strong tackle by Scott Dann.

In their first Champions League game against Juventus this season, Vincent Kompany sustained a calf injury, according to The Guardian. Therefore, he might miss out on the nest Premier League game. Despite this, they are strong favorites to win 1.25 (1/4), while a draw 6.00 (5/1) is the most that Slaven Bilic’s men can hope for in the upcoming encounter. A win for the visiting is a very far stretch 10.00 (9/1), according to online sportsbooks in the UK.

Swansea will host Everton on Saturday, and the odds 2.30 (13/10) are in favour of the home side clinching a win. Although Everton managed to defeat Chelsea 3-1 last weekend, they have been dealt underdog chances against the Swans 3.10 (21/10). A tie between the two is possible 3.25 (9/4), considering that Roberto Martinez will probably not be able to use his entire squad for the game. Muhamed Besic and Seasmus Coleman are not guaranteed to be cleared to play the match in time, as reported by The Guardian.

Tottenham are aiming to utilize their promising players

Tottenham will be tested against Crystal Palace on Sunday. But the good news for Spurs supporters is they have the upper hand 1.90 (10/11). A win for the visiting side is unlikely 4.00 (3/1) and a draw is also not very probable 3.50 (5/2), although the hosts are known to blunder at times.

BBC Sport report that when it comes to certain players, Tottenham manager Mauricio Pochettino has was full confidence they will be able to put on a good show this season. Regarding Erik Lamela “I think this is a key season for him. After two seasons at Tottenham, now is the moment for him. We believe we can develop his game and I think we need to be patient with him.” If everything goes to plan, they should be able to easily overcome the Eagles.