Chui Returns for Second Term as Chief of Macau 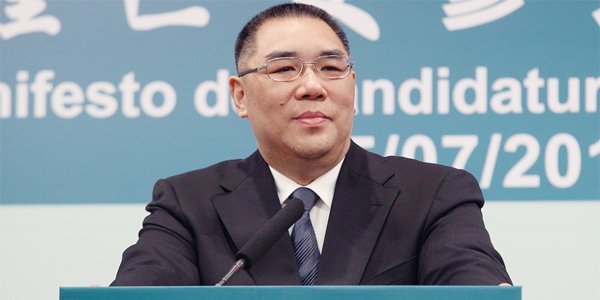 While casino employees continue to protest, Fernando Chui Sai-on was chosen for a second term as head of Macau’s government.

Winning Macau’s top post was certainly no challenge for Fernando Chui Sai-on, who had no opponent. Some locals are suggesting it was a fixed political match, where the entire process was controlled by Beijing to serve China’s interests rather than those of the governed. Chui first became chief executive of the former Portuguese province in 2009, and will be in office until December 20, 2019.

Macau is a Special Administrative Regions where the strict Chinese gambling laws don’t apply and casinos are legal. This privilege allowed the region to develop economically and grow into the world’s largest gambling hub, but some say the mainland still holds the power. Hundreds of casino employees are protesting against the system and against their employers, asking for higher wages and more benefits.

Politics expert Sonny Lo explains: “He [Chui] is under pressure to democratize the system. Casino workers are grasping this golden opportunity to make their views known.”

Macau’s largest and most profitable casinos include:

All of these protests are affecting Macau’s economy, as well as plans for further development. Casino developers are not happy with Chui’s return as chief executive, because the leader proved to be quite tough on the casino industry.

In 2011, his administration imposed a cap on gaming tables installed in casinos, limiting additional tables to 3% a year. Slot parlors located in residential areas were closed. His predecessor Edmund Ho imposed a ban on new casino approvals, but Chui decided to keep it. The policy was criticized by investors, especially by the developers of the Louis XIII boutique hotel located south of Cotai. The company was hoping to add a casino to its existing business.

Chui also added that once the ongoing Cotai projects are completed he won’t allow more casinos for another “seven or eight years”. It took Wynn Macau, MGM China and SJM Holdings years to receive approval for their casino resorts, and the local administration’s policies have caused a serious delay in the completion of these projects.

Sands China received approval to sell its Four Seasons condos after five years of legal wrangling, then Chui revoked the company’s preliminary permission to develop Cotai Lots 7 and 8 despite the fact that Sands had spent $110 million on preparatory work.

While casino developers may consider these measures a bit harsh, local economist Ricardo Siu has a different opinion. Local gambling news quoted him: “Chui and his team took determined actions trying to ensure the healthy and sustainable growth of the industry. The decision on table cap is not simply [taken] by itself, but part of the larger labor issue in Macau.”

The law states that only Macau residents are allowed to work as dealers in local casinos, but the new Cotai resorts will come with hundreds of new gaming tables. Meanwhile, the unemployment rate is at a low 1.7%, and some industry executives have asked the local government to relax the requirement. On the other hand, casino employees would like to see authorities reinforce the policy, in an attempt to protect their current jobs. So far, Chui has backed the workers.

“As a significant number of local dealers still strongly oppose imported dealers, it is quite difficult, although not impossible, in my personal view, to break through this labor bottleneck ahead,” Siu said.

During this year’s campaign, Chui said that casinos should offer more business opportunities to local companies. He added that gambling firms should provide housing and transportation for employees who don’t live in Macau, on top of a nominal monthly housing allowance of at least 500 Macau patacas ($62.50), already required by the law. The amount represents about 10% of average monthly housing costs, and most casinos already run employee shuttle buses.

SJM Holdings CEO Ambrose So said he was willing to discuss the matter, but asked for more land grants in exchange, to build staff dormitories.

The hard part is yet to come

The gaming industry has complained about Macanese gambling laws restraining economic growth, but even so casino revenue has more than tripled since Chui took the lead, growing from $14.9 billion in 2009 to $45.1 billion last year. Experts say the current slowdown has little to do with Chui’s policies, claiming it was caused by factors in mainland China instead. In fact, diversifying the local economy to become less dependent on casino money is a smart decision.

“Chui and his team will take some effective measures to balance some conflicts between the growth of casino gaming and the community’s interests,” Siu believes.

More issues lie ahead however, as the government will have to begin discussing the renewal of the existing casino licenses soon. Some permits expire in 2020, others are valid until 2022, but negotiations will start in 2015 and 2016. There’s a small chance that some licenses will not be renewed, that the licensing period will be reduced, or even that the current 39% tax rate will be increased.

Gambling operators are feeling pretty vulnerable now. On one hand, Macau has become the number one gambling destination since their casinos first opened for business, so it’s in their best interest that they keep going. But on the other hand, the local government is becoming more and more demanding. It remains to be seen who has the toughest negotiation skills.