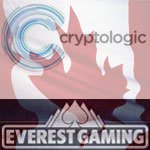 The new deal focuses on supplying gaming content for online casinos in Canada and worldwide and is reported to by a multi-year contract.

The terms of the new partnership will see Everest introduce at least eight Cryptologic online casino slots throughout the entirety of its online casino gambling brands. The first game already went live this May.

Vice president of operations at Cryptologic, Ian Price, had the following comments for Canada gambling news: “This expanded agreement strengthens our existing relationship with BetClic Everest Group, and will enable millions of their players to enjoy an even broader variety of Cryptologic games.”

He went on to add: ”BetClic Everest Group have been a successful licensee with Cryptologic since December 2009 and their desire to gain access to a wider range of Cryptologic’s games once again illustrates the quality of our content.”

Director of casino at Everest, Etienne Leroy, also commented the new deal: “At Everest, we pride ourselves on the variety of games we have on offer to our customers, and we are therefore delighted to release the additional Cryptologic games on all our seven Casino brands.”

He added: “By delivering value and entertainment for our online customers, it is no surprise these games have proven popular on our sites thus far, and we are pleased to be building on our relationship with Cryptologic for the future.”