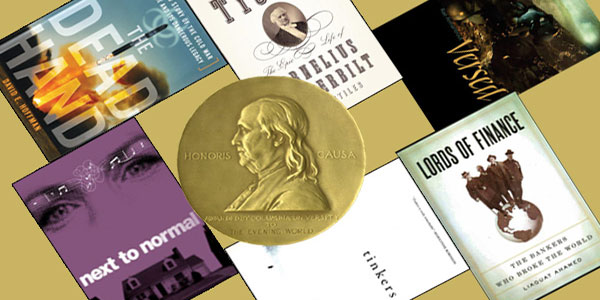 A town eaten away by cancer, the rescue of a famous painting by a boy, a shipwrecked advocate of human rights are some of the stories that merited Pulitzer Prizes in 2014.

When Joseph Pulitzer wrote his will in 1904, which made allocations for the founding of the Pulitzer Prize as an enticement to literary perfection, he stipulated that for the Letters category, prizes were to go to an American novel, an original American play performed in New York, a state which upholds US gambling laws today, a book on the history of the United States and an American biography. The 7 writers and composers were able to fulfill all that and more and thus became winners of the Pulitzer Prizes in the Arts Category in 2014

Pulitzer a visionary who instigated and expected change

However, Pulitzer foresaw the necessity for change as well. He thus made provision for comfortable changes in the awards system. He instituted an overseer advisory board and asked for “power in its discretion to suspend or to change any subject or subjects, substituting, however, others in their places. If in the judgment of the board such suspension, changes, or substitutions shall be conducive to the public good or rendered advisable by public necessities, or by reason of change of time.”

Last year the Pulitzer Prize Board made its recommendations for the 2014 prizes when it met at Columbia on April 10 and 11 and then handed them over to President Lee C. Bollinger. The awards were then presented at a luncheon on May 28 at Columbia University. Prizes in the Letters, Drama, and Music Categories were given to 7 people whose astounding work won them world wide recognition, respect, honor and a $10, 000 reward each.

Drama and a Shipwreck

In the Biography and Autobiography section, Megan Marshall won the prize for writing the biography, Margaret Fuller: A New American Life, published by Houghton Mifflin Harcourt. The book was obviously built on thorough research. According to literary reporters, the story surrounds a 19th century author, journalist, critic and pioneer of Women’s rights’ advocacy, who lost her life in a shipwreck.

In the Drama Category, The Flick, by Annie Baker came out the winner. She was inspired by a theater where the rows of seats faced the play’s audience. “I thought about it for years before I started writing — the idea of characters looking up at the screen, but facing the audience,” Ms. Baker said. The drama is about 3 misfits, working in an art-house movie theater in Massachusetts, which makes it all the more rare. Ms. Baker’s drama features long, life-like silences dotted with awkward but all too-real conversations. Ms. Baker, who is thirty three years old, is a rising star among playwrights in New York.

Of Fiction and Fishing

In the Poetry Category, 60 year old, Vijay Seshadri won the prize for his poetry collection, 3 Sections, which was published by Graywolf Press. 3 Sections is a rather powerful collection of poems that delves into the consciousness of human beings. It describes the travel from birth to dementia as humans seek their identity, mobile betting news report.

The ‘tone’ is riddled with the funny, the severe, the charitable and the relentless. It explores contemporary American life and consists of a short, lyrical poems, a long poem, “Personal Essay” and a prose essay on fishing in the Canadian Pacific. This is Mr. Seshadri’s third collection of poem of which he says “I always wanted to write a book whose title reflected its form. I envisioned seven, but I only made it to three.”

Of Fiction and Fishing

Donna Tartt won the prize for Fiction. The name of the book which made her rise to fame is The Goldfinch, published by Little, Brown. The novel is well-crafted, stimulating and touching. It is filled with compelling characters too.

The protagonist comes into possession of a small famous painting, saved from destruction, following an explosion at a museum. Ms. Tartt, said the novel “was always about a child who had stolen a painting.” However after 2 years passed while she was still writing the book, she saw “The Goldfinch,” a 17th-century work by Carel Fabritius.

That gave her the idea for the name of the book as “It fit into the plot of the book I was writing in ways I couldn’t have imagined. It had to be a small painting that a child could carry, and that a child could be obsessed by.” When judges read it they described it as “a beautifully written coming-of-age novel with exquisitely drawn characters”. Ms. Tartt was both “surprised” and “very happy” to receive her first major literary prize of any kind, from Pulitzer.

The Internal Enemy: Slavery and War in Virginia, 1772-1832 was the winner in the History Category by Alan Taylor. The work was published by W.W. Norton. It is a perfectly illustrated account of clever and imaginative runaway slaves in the colonial era who, during the War of 1812, sought liberty by escaping to the British side. The book speaks about their acts of courage. He used documented accounts from a commission to requite slave owners for their lost property. “It was a great opportunity to be able to tell a story about the nature of slavery and freedom in the early years of the Republic,” Taylor said.

The General Non-Fiction category was won by Mr. Fagin, 51, who wrote Toms River: A Story of Science and Salvation, a work published by Bantam Books. The book is a smooth mix of investigative reporting and historical research to that delves into a New Jersey seashore town where cancer wreaked havoc on the population because of water and air pollution. He completed the book when he came into employment as a science journalism at the New York University. Fagin wanted to highlight how important it was to lead readers “to figure out the relationship between what is happening in our environment and human health.”

In the Music Category, Become Ocean by John Luther Adams won the prize. The musical tribute was first published by Taiga Press and Theodore Front Musical Literature. It made its debut on June 20, 2013, then was played on May 6, 2014 at the Carnegie Hall, by the Seattle Symphony.

According to US gambling news reports, it went on to win the hearts of the Pulitzer committee, who called the music a “haunting orchestral work that suggests a relentless tidal surge, evoking thoughts of melting polar ice and rising sea levels.” Mr. Adams, 61, said he composed the piece while on the Pacific coast in Mexico, but which was in part inspired by Alaska, where he lived for decades. “What I really hope is that the music now has become its own place,” he said of the work.