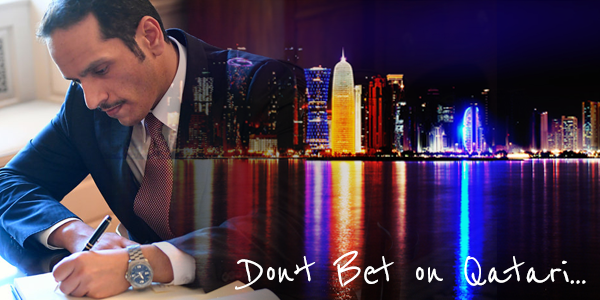 The 2017 Asian Athletics Championships are being held in Bhubaneswar, India, and among the 655 entrants from 45 different nations there will be eleven from the small but notoriously rich gulf state of Qatar and whilst you might be disinclined to bet on Qatari athletes you might not want to bet against the country that boasts the greatest riches per capita as it remains under international pressure.

As the gnat-like attention span of the international press swings towards the impressive fireworks of North Korea testing ICBM systems and the Americans reacting as if World War Three were but days away the Gulf States crisis has had to take a back seat. This isn’t to say that North Korea isn’t an important story in its way, but if there’s a flash point more imminent I’d not bet on Qatari patience or luck to last forever, although that being said they can probably count on the depths of their pockets instead.

Whilst watching the two fat, stupid, ugly kids, Donald Trump and Kim Jong-un, try to slap each other like a pair of teenage girls on PCP is perhaps the most visually arresting television (what’s not to like about rocket launches?) but the Gulf States crisis is definitely the more urgent matter with the deadline for Qatar to comply with the latest ultimatum passing and further steps likely you don’t have to bet on sports in Qatar every weekend to know this is going to get much worse before it gets any better.

Bet365 Is A Favorite In The Gulf States

You can always bet on the Qataris to spend instinctively in defense like Squid spew ink and lawyers resort to jargon but with the cost of imports from Turkey and Iran mounting one has to wonder how long they can keep that up. The Qataris claim indefinitely but that might be stretching a point and if their defensive rhetoric sounds hollow it is only mirrored by the somewhat ridiculous statements emanated from the opposing side, especially the ring leaders sat in neighboring Saudi Arabia.

“We’re not doing this because we want to hurt Qatar,” assures the Foreign Minister of Saudi Arabia Adel Bin Ahmed al-Jubeir with a straight face as the deadline lapsed, “we’re doing this to help Qatar.” and for those of you unsure, yes, yes that really does smack a bit of the 1960s and the famous ‘we had to destroy the village to save the village, sir’ attitude of the Vietnam conflict. One can only hope this one doesn’t last as long, although I doubt there is anyone in Qatar gambling laws of diplomacy will bring it to a swift conclusion.

“A siege that is a clear aggression and an insult.” Complained the Qatari Foreign Minister Sheikh Mohammed bin Abdulrahman al-Thani of the situation, stating that “The answer to our disagreement is not blockades and ultimatums, it is dialogue and reason.” Which deftly misses the point given the dialogue is likely to be “Will you stop giving money to terrorists?”. You can bet on Qatari officials to be doing all they can to calm things down but in its ongoing battle with Iran for regional supremacy Saudi Arabia seems unwilling to back down.

The US would usually mediate this sort of thing, but with Rex Tillerson at the helm the US State Department is a shadowy fraction of the influence it should be and even with 10,000 troops on the ground you’ve a feeling the US might just be sidelined and any Qatari gambling news from the North Korean peninsula will keep Donald Trump (recently described as “President WTF?”) too busy to help them might just be stocking up a bomb shelter for when Saudi Arabia run out of patience and Iran runs out of charitable feeling.