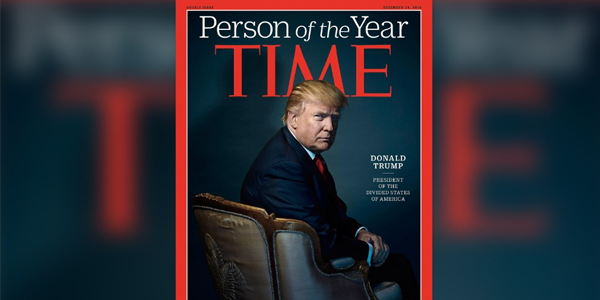 It is one thing to reach the very highest echelons of your chosen field, to be lauded by your peers and celebrated as a success by the public, but you only really know you’ve made it when Time Magazine decide to put you on the cover, and you can bet on the Time Person of the Year cover being the one they all want to be on. So just which of the big names that have hit the headlines over the last year will win this coveted title? We take a look.

It began with Charles Lindbergh back in 1927, hailed by Time as their Person of the Year and widely seen as a hero of the age, although as you might imagine at the time they referred to it as the Man of the Year, the gender separation not divesting itself from the competition until 1999. Over the years since the first man to cross the Atlantic in a plane won this prized cover the big names who’ve won have only added to it’s kudos and you can bet on the Time Person of the Year being quietly desired by all.

Doubtless most of those up for the cover this year would deny it’s importance, but to join the ranks of those featured over the years, like Mahatma Gandhi, Franklin D Roosevelt, Winston Churchill, John F Kennedy and Pope John Paul II is probably as high praise as is possible to attain. Not that you can bet on the Time Person of the Year to always be a nice guy, indeed if you’re going to take advantage of French gambling laws to hit up Unibet to wager on the outcome do remember, less than nice people have won too.

Who Will Win This Coveted Cover Story This Year?

Both Adolf Hitler and Joseph Stalin have been featured as the magazine’s person of the year, Richard Nixon got there twice in a row, and Donald Trump won just last year. It’s one thing to be associated with Pope Francis and Jimmy Carter, Henry Kissinger and Ted Turner, but quite another to stand in ranks that feature Ruhollah Khomeini and Ken Starr. That said you can’t bet on the Time Person of the Year going to an individual when over the course of the last ninety years groups have won it too.

In 1956 the Hungarians who fought in their anti-soviet uprising won and a decade later in 1966 it was the inheritor generation of under 25 year old Americans who were featured. Those who fought Ebola got the 2014 cover and back in 2011 it was the somewhat generalized “Protestors” who beat out the rest of the competition. If you like to bet on sports in France and fancy a small novelty wager as 2017 runs down, this year’s selection of worthies at Unibet could be for you, because Emmanuel Macron is in the lead.

Bet On The Time Person Of The Year At Unibet

At Unibet a bet on the Time Person of the Year to be Emmanuel Macron will only get you 6/4 odds, streets ahead more likely than either Donald Trump or Angela Merkel both of whom have won before and both of whom get 4/1 odds to snatch that desirable cover story. Kim Jong-Un gets 10/1 and is probably worth a punt, although Colin Kaepernick gets the same odds and seems unlikely to win if only because Time Magazine wants a quiet life. Naturally whilst these are the favorites there are other bets.

You could give Elon Musk a try at 14/1, the same odds that Jean-Claude Juncker garners, or lose your mind entirely and believe that 20/1 shot Nigel Farage might instead. Aung San Suu Kyi is at 50/1 at Unibet despite being responsible for an ongoing genocide and Zlatan Ibrahimovic gets 100/1 which are probably the same odds as me winning. If you’re French gambling news headlines will be of Macron winning, keep your fingers crossed, he should have this in the bag, and if you’re not, just hope it’s not Trump again.