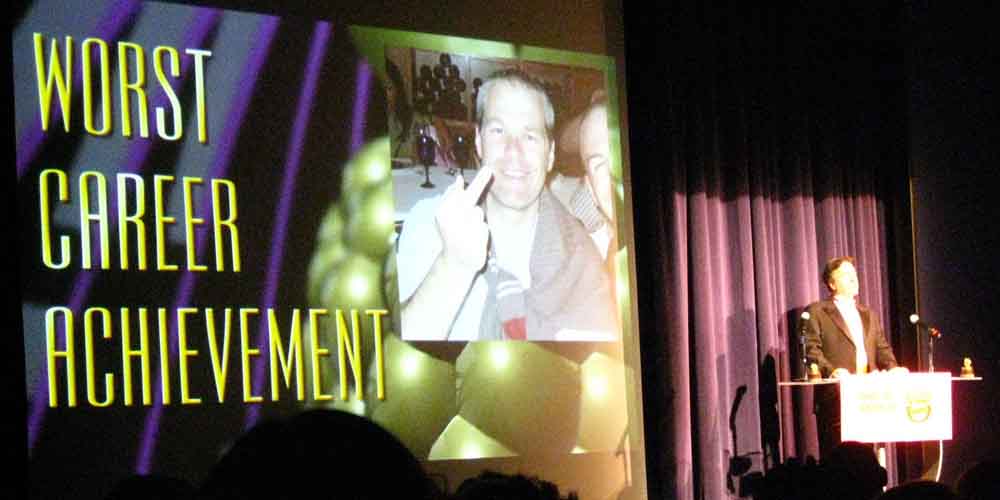 The Razzies are now just part-and-parcel of the Oscars circus. Held the same weekend, they’re a fun part of the build up to the big event. In a town often said to be full of itself, they stick their tongue in their cheek and savage the industry. They also have a habit of savaging the bookies too. The bookies like Bovada know their odds on the Razzies are only aspirational at best and often wrong. Which means taking advantage of US gambling laws to bet on the Razzies is more fun.

In 2021 everyone thought Music would win Worst Film. Online bookies in the US certainly did. However rather than the 5/6 favorite, the jury went for a 14/1 outsider, awarding the prize to Absolute Proof. So just because the odds on the Razzies this year tip He’s All That to win, doesn’t mean it will. You can find plenty of other movies that are just as bad. Just as worthy of winning this dubious honor. So don’t let the 2022 Razzies odds divert you from your instincts.

You may feel that whilst He’s All That is as utterly dire as the odds on the Razzies suggest, The Tomorrow War is worse. A more deserving winner. You may have had to sit through Cinderella or Space Jam – A New Legacy with your kids and know they’re trash. Or perhaps you believe, as they did last year, they’ll get topical and choose Locked Down. Locked Down gets 15/2 at online sportsbook sites in the US like Bovada right now and is a rather good bet on the Razzies 2022.

Bland May Not Be Enough To Win These Awards

Of course, Absolute Proof spawned more than just a win for Worst Film. Mike Lindell also won Worst Actor. Although that is stretching the definition of ‘actor’ quite a bit. Then again, they also gave the Worst Supporting Actor prize to Rudy Giuliani for his appearance in Borat Subsequent Moviefilm. So those awards could go anywhere this year and the odds on the Razzies suggest they might. Not that all the awards on offer are necessarily at the whims of fate. Some are obvious.

The Kissing Booth 3 and Coming 2 America may not win Worst Film but they could still win prizes. The odds on the Razzies Worst Prequel, Remake, Rip-off Or Sequel Award give them a good chance. Although Space Jam – A New Legacy might just sneak in a win before the buzzer on that one. Certainly, online betting sites in the US like Bovada price it short, albeit it a way behind that Kissing Booth 3 calamity. Of course, West Side Story is in with a shout there too.

Bovada Has All The Odds On The Razzies You Need

Indeed if Absolute Proof proves anything it’s that long shots can beat the odds on the Razzies. So perhaps West Side Story will win Worst Sequel, or something like Jungle Cruise might in the Worst Film category. Sure, at 50/1 it is way out there, but it was another of those films where big stars phoned in a performance. We’ve had to weather quite a few of those in recent years. SAS – Red Notice, Vanquish, Thunder Force and Mortal Kombat all fall into that category really.

They’re all automatically in with a chance at that Worst Film award. However, you must be cautious. Some online bookies in the US have based their odds on the Razzies on how bland the movies are. That may prove in error. The Razzies don’t reward bland but bloody awful. So if you’re going to eschew your regular bet on sports in the US for a punt on the Razzies go with your gut. We all instinctively know right from wrong, and the terrible from merely the mediocre.

We take a look at how last year’s results suggest the odds on the Razzies could be more than a little misleading.